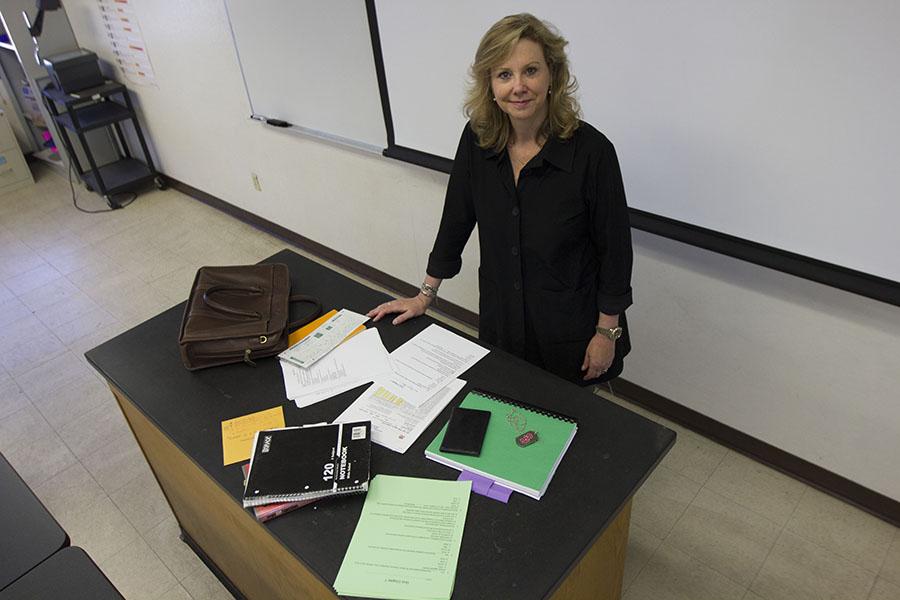 PHOTO ILLUSTRATION: Justice Studies Instructor, Kelly Wellman, prepares for her Intro to the Administration of Justice class on Tuesday, March 18, at City College. Wellman is the newest instructor for the Justice Studies Department.

From working in Hollywood to working with the FBI, City College’s new Justice Studies professor has seen it all.

Kelly Wellman was born in Des Moines, Iowa, and moved to New York with her mother when she was five.

After graduating from the University of Alabama where she earned a bachelor’s degree in Broadcast Journalism, Wellman moved to Santa Monica to pursue a career in acting.

“Going into the criminal justice field was never on my radar,” Wellman said.

After waiting tables for three years, she started to land minor roles in television shows such as “Melrose Place”, “Seinfeld”, and “Parenthood.” However, Wellman said the inconsistency of working in Hollywood was taking a toll.

Her dream of becoming an actress grew tiresome after 12 years in the business and it was time to move on. Wellman started her criminal justice career with the FBI in the mid 90’s.

At the time, Wellman was reading Patricia Cornwell’s, “The Body Farm.” That book, combined with the O.J. Simpson crime that had just occurred, encouraged Wellman to start a new chapter of her life. As soon her current movie wrapped, she called the FBI and began her application process.

Wellman had always been interested in the behavioral science aspect of the criminal justice field, so she enrolled in Antioch University to get her master’s in Clinical Psychology.

“It gave me insight as to how cases are put together and what to look for when investigating a case,” Wellman said.

With a total of 20 years working as an investigator, Wellman has dealt with everything from child pornography, to fraud, to Viagra theft.

Recently, she left the Federal Defenders Office to teach and start her own firm.

“My commute 15 miles, was becoming an hour and a half. The quality of life began to deteriorate in a sense,” Wellman said.

She was eligible for an early retirement program through the government, so she took the offer and began to work on her personal investigator license.

Teaching had always been in the back of her mind as a way to spend the last segment of her professional life, and that idea was set into motion when she met Anne Redding, justice studies associate professor.

Wellman loves teaching at City College, and says that working for the Public Defenders Office has enabled her to use real-life scenarios in class.

“It’s good to know she was actually in the work force,” said Rachel Hess, a 19-year-old Criminal Justice major.

She continues to run her private family therapy practice that she has had for the past 13 years, along with Wellman Investigations, her private investigative firm.

Intro to the Administration of Justice is the first class she has taught on campus. Next semester, Wellman hopes to be teaching two on-campus classes along with her online class.

“Don’t pigeonhole yourself,” Wellman said.  “Sometimes things don’t always make linear sense, but you can always change things up along the way and there’s something freeing in that.”