New law: SBCC chefs must use gloves when touching food 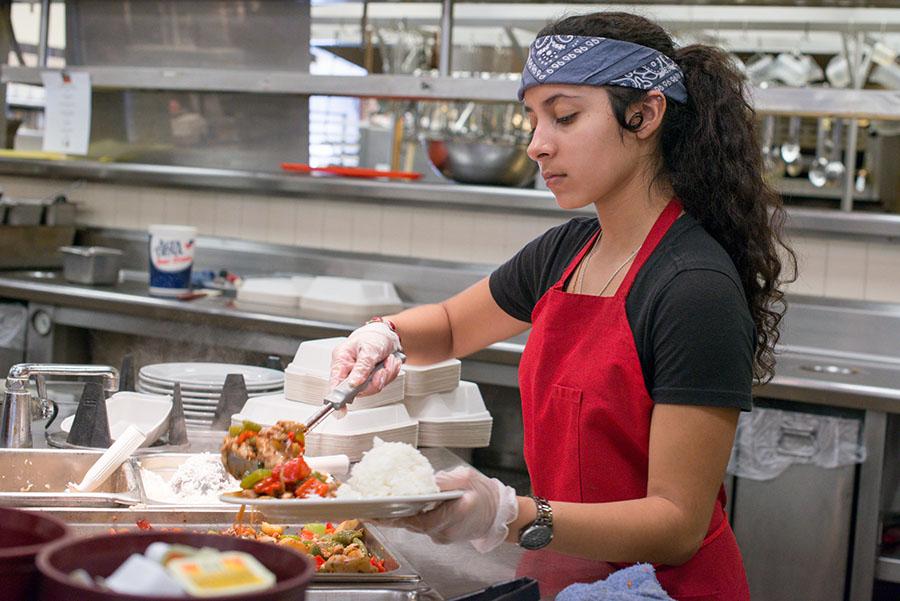 Marina Flores, 19, communication major, puts together a food order in the East Campus Cafeteria at City College. The food handlers are now required to wear gloves when working with ready-to-eat food.

Sending compliments to a chef with a handshake or high-five may be reduced to an awkward forearm bump like surgeons after a messy operation.

The law will be effective beginning June 2014, and will change City College’s procedures on how food handlers administer meat, poultry, bread, fruit, vegetables and drinks containing ice or anything edible.

“Gloves do affect your feels and sensations,” said Randy Bublitz, culinary arts department chair. “It’s not as efficient in shaping and manipulating food.”

“Touching many different things with the same glove, you’re cross-contaminating as if you were using your hands. All they do is keep your hands clean, but it doesn’t keep the food from tainting itself,” Bublitz said.

“Gloves make sense if you’re doing the same thing over and over again,” said Bublitz. “But most cooks don’t just do that through the course of the day. The problem is people start to think of gloves as magic.”

“It’s hard on your knife skills. It’s hard to wear a glove when you’re chopping and makes you more likely to cut yourself,” said Alex Kosman, a sophomore culinary student.

Enforcement of the code is still months away but the East Campus Cafeteria is ready to put the gloves on. The West Campus not so much. The student servers roll burritos, touch ladles, and touch customers food.

Throughout California, food and beverage communities are protesting against the new law.

According to the Los Angeles Times, sushi chefs are in an uproar over the code. They’re in close proximity to potentially contaminated sea creatures every day.

Bartenders have also taken a stance on the law by creating a petition on Change.org. They’re seeking signatures for their exemption from the law.

Sara Dickerman, freelance food writer and cook, explains her glove frustrations in her piece, “Down With Gloves: Why chefs shouldn’t have to wear them.”

“When you use a mandolin, little slivers of glove always seem to land in the food. And, yes, as with sex, the sensual pleasures of cooking is dulled when there’s latex in the way,” Dickerman wrote.