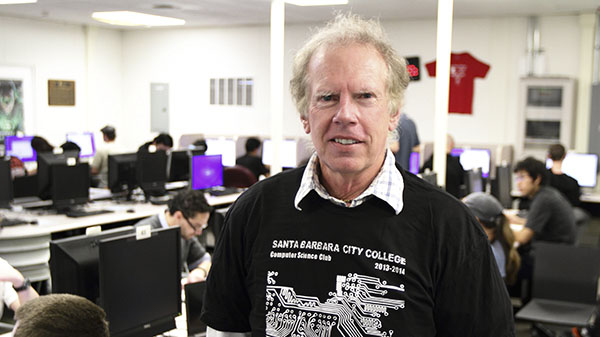 His nickname on campus is “Coach” due to the guidance he’s provided to computer science students.  He’s been teaching on campus for 35 years and many say he literally built the department.

“He is an icon,” said Stephen Strenn, computer science professor.

Dependahl says his nickname started one summer semester when students started calling him “Coach” because of the way he lectured in class.

“It’s an honor I take because I think of coaches as people who want their teams to succeed,” Dependahl said.

He said there is no greater career than being a professor and enabling success, and feels he’s making the world a better place by teaching students.

“My favorite part of teaching is during a lecture when you see a student get the idea, and the light turns on. They walk away and they say ‘Wow, thanks that’s cool, I learned something today,’” he said.

Dependahl relates teaching to a video game his buddies got him into that he still plays today called Everquest. In the online multiplayer adventure game players can choose a character and he always picks the same one.

“I have always played a healer, someone that helps people, or guides them. That’s a huge part of me,” Dependahl said. “If I can inspire and impact anyone’s life in anyway, help in a positive way, I get a lot out of it. So that’s who I play in the game. I like to make the world a better place.”

The computer science field has changed dramatically since Dependahl first started. He said computers were so slow that a student would submit a job and it might take three or four hours to get results back. Now, with the newest technology it only takes seconds.

Dependahl said students are able to retrieve information immediately and it’s led to dramatic increases in programming languages. Problems can be solved and understandings come intuitive in a short amount of time.

“It’s really quite incredible, night and day difference,” he said.

He said that technology is going to get even faster, cheaper and better. This transition is where Dependahl sees the computer science field going in the future.

During retirement Dependahl plans to travel. He’ll be meeting friends in Munich for Oktoberfest and wants to visit Scandinavia, Norway, Denmark and Sweden.

He also visits family in Holland every summer.

“It feels good, the whole value system, the way they look at life. It feels like home,” he said.

He also plants to stay connected the City College campus after he retires.

“The biggest part of my life has been my students, this college and all the experiences it’s provided me,” Dependahl said.