Rain or shine, Excursion Club members take to the outdoors 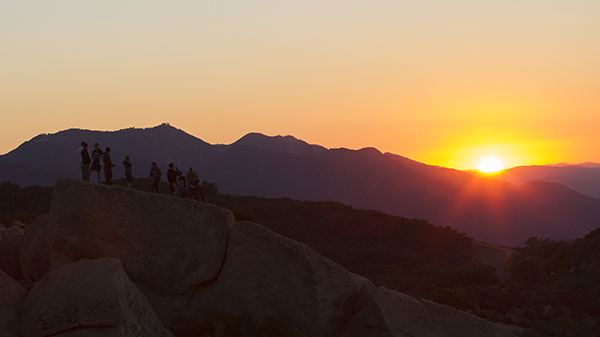 Members of the Excursion Club wake up to see the sunrise after a night of camping at Lizard's Mouth early Saturday morning, Oct. 19, 2013 in the Santa Ynez mountains.

Under the moonlight, the students begin to climb into the mouth of the lizard. They reach the summit, and the not-so-brave onlookers cheer their successful ascent.

Welcome to The Excursion Club, a group that provides memories and life experiences for anyone looking to get outdoors and do something different.

The student-operated, non-profit club is 10 years old and now has some 1,500 members compiled of mostly UCSB and City College students. The club is not exclusive to just students however; anyone eager to get outdoors is able to join.

From sleeping bags to dirt bikes, surfboards to kayaks, paintball guns to fishing poles, members have access to any piece of equipment that involves the outdoors.

This past Friday a group of club members headed up to the Lizard’s Mouth, a cave in the mountains above Santa Barbara and Goleta. With more than 30 trips weekly to choose from, excursions like this are common for club members.

A one-year membership with The Excursion Club costs $60.  For those a bit skeptical, there is a 90-day, $30 membership to test the waters, or the land, if you will.

Upon joining the club, members will receive an e-mail explaining all the trips and activities planned for that week.

Club Director Matt Rich has been a member for almost two years and was recently elected to his position at the beginning of the summer. The 21-year-old UCSB student from Santa Rosa, has always enjoyed the outdoors and is now sharing his passion with those who wish to get active.

“It’s pretty great when you see people break out of their shell and realize these things are possible,” Rich said.

A diverse list of activities gives members the opportunity to try many things with people that are also learning, all while cheering one another on.

“You get to meet other people who possess skills so they can teach you and can also meet people who are just joining the club who are learning,” said staff member Dane Larson.

A 24-year-old Santa Barbara native and City College student, Larson has been in the club for nearly two years and is now a staff member who leads different trips throughout the week.

He also led the recent trip up to Lizards Mouth.

The crew of 25 set up camp around dusk right as the warm evening sun set over the ocean. As everyone got acquainted with one another in the cave that would be home for the night, Larson began to cook up a quinoa and vegetable meal for those who wanted to eat.

He took a group of five adventurous members into the rock formation that coined this spot “Lizard’s Mouth.” As they climbed, cushioned padding called crash pads were positioned below the climbers just in case a wrong step was taken.

The night ended back in the cave with Larson playing his ukulele as the group joined him in singing campfire classics “Drive” by Incubus and the original “Wagon Wheel” by Old Crow Medicine Show.

Although those on the trip may not have known each other prior to the excursion, the several hours brought the group closer as they realized there is a weekend life outside of the alcohol-drenched streets of Isla Vista.

The campers awoke the next morning to the sun peeking itself above the mountains and illuminating the marine layer above the Pacific Ocean. Pictures and smiles were the theme of the morning as Larson cooked his famous campground pancakes.

With a vast sweep of the area, the group picked up any trash that may have been brought to the site. The club emphasizes not “leaving a negative footprint” so the next people may come and enjoy what nature has to offer, without any trash.

“We like to express ourselves and the way we do that is getting outdoors and engaging other people to get outdoors,” Larson said.  “I’ve seen so many people meet through Excursion Club and now they do what they love together.”

Jack Hereford, a 19-year-old City College student from Flagstaff, Ariz., joined the club only days prior to the trip this past Friday.

The experienced climber came out to Santa Barbara and was pleasantly surprised that there was something like The Excursion Club available to an outdoorsman like himself.

“This is the best thing about Isla Vista,” Hereford said.  “There’s nothing else like it and I’m blown away by how sweet it is.”

All who are interested are encouraged to attend the clubs weekly meeting held Tuesdays at 7 p.m. at UCSB’s Broida Hall, Room 1610.