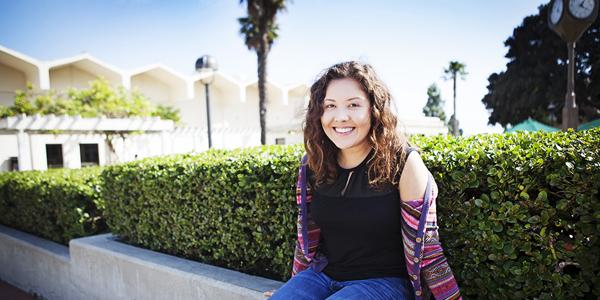 It’s 8:40 a.m. on a Friday and the only sound coming from the student senate room is the soft clanking of nameplates being set up by a diligently working senator.

By 9 a.m., she manages to stop thinking about the numerous papers due in her political science classes, the projects she’s organizing to help save the environment and the photos she will have to shoot later on that day.

For two hours every Friday, Elie Katzenson ensures that the Associated Student Senate has her focused and undivided attention.

Last year, she lost to current President Geneva Sherman in a tight race. This year’s elections caused the same anxiety for her with a win of a mere four votes against her opponent Nicholas Steil.

“I knew I couldn’t focus on what he was doing. All I could do was urge people to vote and as the same way as last year, you just go for it and if it works out, it works out and if it doesn’t then you did everything you could,” Katzenson said.

A 19-year-old who was born in Doha, Quatar but raised on military bases in Turkey, Germany, Netherlands and the United States, Katzenson can speak French, Spanish, as well as conversational Turkish and German.

She completed international High School in the Netherlands and made the move to City College when she was around 18 years old. 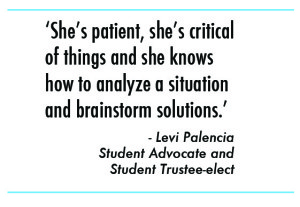 “I was a strong high school student. I did applications to Ivy League schools, big schools… I was hoping for Stanford because I was really kind of blinded by school reputations,” Katzenson said. “I soon realized coming in that I would be paying over $200,000 [for four years] and political science requires a master’s degree.

“But just because a school doesn’t have some big reputation doesn’t mean that it won’t have strengths that fit you.”

Her father attended City College when he was in his twenties and she found it to be the perfect fit for her.

With a double major in political science and photography, she said coming to City College has given her a space to flourish not only academically, but creatively as well.

“Photography, while it is my hobby, it is also school work,” she said. “It’s draining in a different way, but the majors really balance each other out with having work and pleasure.”

While going to school full-time to work on her double major, Katzenson somehow makes time to be on the senate.

She takes her role as a senator beyond just helping the school. She works behind the scenes to make sure the senate is running as effectively as possible. She said she tries to remind senators how important their jobs are and how what they’re doing really does make a difference.

“In my experience, the senate usually has a third to a quarter of the members really passionate about what they’re doing,” said Katzenson. “And maybe three-quarters to two-thirds are very passive and there shouldn’t be anyone who’s passive on the senate.

“If that’s your deal, then you should resign.”

Earlier in the semester she was avid about reminding the senators to check emails, show up on time and participate in an active and professional manner.

“It’s really embarrassing when we have high up college administrators come to our meetings and we have to make them wait because over half the senate is showing up late,” said Katzenson. “We need to hold each other to a higher standard of accountability.”

She was the only senator to speak up about the negative aspects of the senate and work to actively improve them.

As the vice president of internal affairs, which acts as the right-hand man to the president, Katzenson found herself playing the role of president a few times in Sherman’s absence.

Sherman has been president both years Katzenson was on senate.

“I really learned from Geneva how to deal with someone you might be intimidated by,” said Katzenson. “She handles these guests we have with a lot of grace and I hope that I can do the same.”

She is involved in numerous clubs and organizations, ranging from the Middle Eastern Studies Club to the Student Sustainability Coalition, with whom the Senate collaborates frequently.

One of her biggest accomplishments this semester was helping write a resolution to get City College involved in fossil fuel divestment.

“She’s patient, she’s critical of things and she knows how to analyze a situation and brainstorm solutions,” said Student Trustee-elect Levi Palencia. “She feels very passionate about the environment. I guess you could say she’s the environmentalist on the senate.”

For next year, she wants to work with the Student Advocate and the Student Trustee and making sure the senate is expressing their power throughout the administrative veins.

The main area where Katzenson wants to improve is better representing the student voice. She plans to set up tables on campus where students can express their opinions and concerns about the school.

She also wants to do more online and in-person polling to make sure the senate is representing the student body as accurately as possible.

“We’re all very excited to have Elie as president,” said student senate advisor Amy Collins. “We know she will continue to do amazing things with the senate. We expect nothing less of her.”