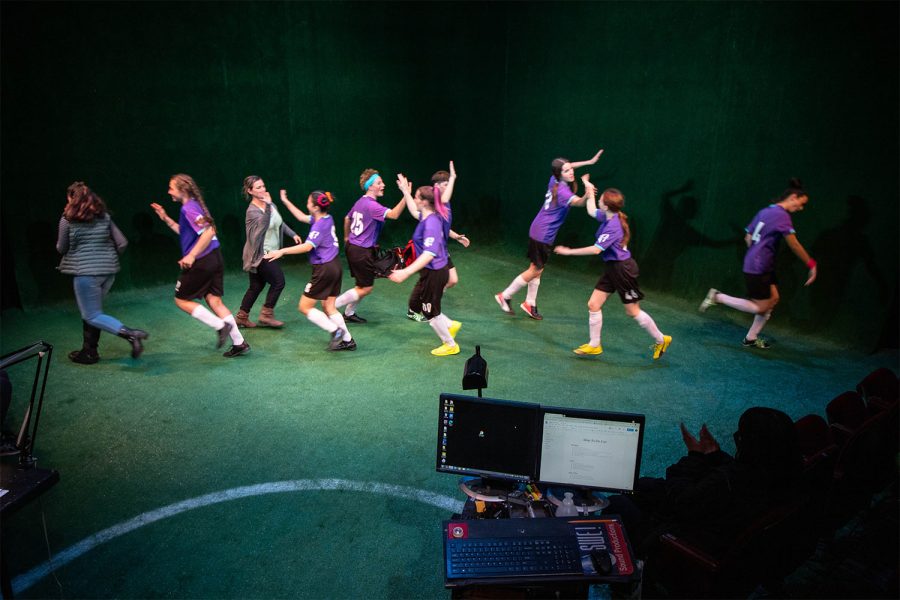 The cast of "The Wolves" runs and cheers at the end of practice on Saturday, April 2 at the Jurkowitz Theatre at City College in Santa Barbara, Calif. The Theatre Group at SBCC looks back upon their successful spring 2022 season.

After an ambitious and fortunate season, the Theatre department is proud of all the work put into this semester’s productions.

The Theatre Group at SBCC put on two shows this spring semester, “Murder on the Orient Express,” and “The Wolves,” and two shows in the fall, “Laughing With Durang,” and “Ripcord”.

“Overall it’s been a good year,” said Theatre Director Katie Laris. “We never had to cancel one show, it’s such a relief.”

In the past two years, many productions have been canceled due to the COVID-19 pandemic leaving a drastic effect on theater around the world. City College’s talented Theatre Group gained fortune by never having to cancel a show due to a COVID case.

This season the department tested their skills and tried things never done before. During the fall semester, the group put on “Ripcord” and actually had actors flying across the stage. In “Murder on the Orient Express,” they challenged themselves technically with the train prop physically moving across the stage. These aspects to the productions brought daring excitement to the theatre directors and actors involved.

“‘The Wolves’ was a little edgier than things we have done in the past,” Laris said. “There were people who were appalled by the language, our audience was surprised, but it was a great piece.”

The crew had fun with “Wolves” due to the change in tone and different rehearsals along the way. Laris said they collaborated with the PE department and actually had the soccer coach come in to work with the actors.

“It was a very happy group of actors who just loved doing the show, and our audiences were happy to be back,” she said.

Through the excitement of it all, everyone involved has been thrilled to be back in person.

“I feel like what made everything better and more fun was seeing everyone in the class giving their 100% when it came to performing, which inspired us all,” wrote City College Theatre student Markham Sames.

With worry of actors and students losing fundamentals such as memorization throughout the pandemic, Laris has been giving her classes a focus on gaining back the “realization of how much is involved” when it comes to acting.

“Acting is such a physical, emotional, and intellectual, [subject] with so many skill sets that aren’t necessarily tested on zoom,” the director said.

Laris is proud of the emotional connections the actors have reached this semester, and the improvements made this season.

“Everyone puts in so much time outside of class to make sure the productions we are performing have reached their full potential,” wrote City College student and actor Elizabeth Urwick.

At 7 p.m. on May 5 at the Jurkowitz Theatre, the Theatre Group at SBCC will be celebrating the student’s hard work from this semester with the “One Act Festival,” a student directed show made by the advanced acting class.

“I’m really proud of all the actors that participated, took the risk, donated their time, and decided to take a chance on theatre again,” Laris said.