‘The Wolves’ scores with audience through powerful performances 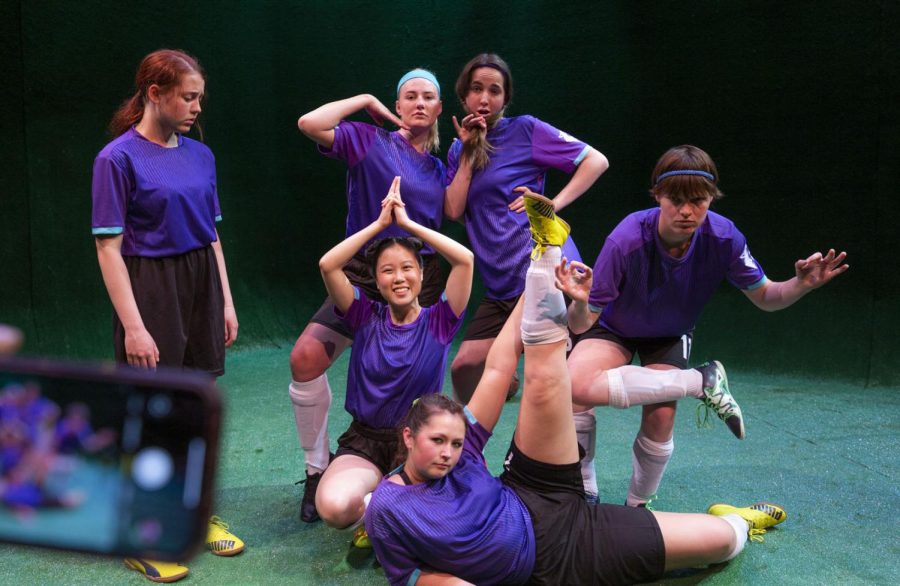 At 7:30 p.m. on Thursday, April 7, the lights in the Jurkowitz Theater at City College dimmed, and the sounds of a soccer coach echoed around, preparing the audience for a sequence of practices that would surely give listeners a new perspective on the word “team.”

The Theatre Group at SBCC performed “The Wolves” a contemporary coming-of-age play written by Sarah DeLappe.

This play proved to be unique in many ways as it was made up of little stories that focus on strong, young women who are going through more than what meets the eye where they discuss an array of topics over drills and sliced oranges. Addressing issues such as eating disorders, stress and loss.

The play follows a team of nine girls for the indoor soccer team “The Wolves.”

Director Sara Rademacher chose a wondrous array of actors to portray each of these voices and created a diverse cast that left the room in laughter and even sympathy.

Number 46, played by Santa Barbara High School junior Hattie Ugoretz, couldn’t stop the audience from cracking up. The clueless new girl act provides scenes that are downright awkward and all too familiar for many watching.

Each of these actors presents a unique character that the audience grew connected to in some way or another. By the end, most of the theater was left in tears over the emotional persistence these ladies prove to possess.

The girls’ conversations during practice are filled with more than just gossip, weaving in and out of politics, menstrual products, and their personal relationships.

Focusing was difficult during the opening act with the way the characters talked over one another but this showed the power of natural human communication. As your brain jumps listening to multiple conversations at once you begin to understand the characters’ age and interests more.

Something I found to be powerful was the lighting cues and the green turf set. The abrupt scene changes made it easy to follow and understand the team throughout their wins and losses.

The audience sat close as if they were watching soccer gameplay out. Something so simple as this can leave a strong impact when storytelling.

The biggest takeaway was the connections between these fierce, fearless females and the importance of cherishing one another when navigating through tough times.

“The Wolves” will be playing at the Jurkowitz Theater at City College until April 23.

Tickets can be purchased on the Theater Group at SBCC website or the Garvin Theater Box Office 805-965-5935.