All aboard the murder express, Theatre Group is back in action 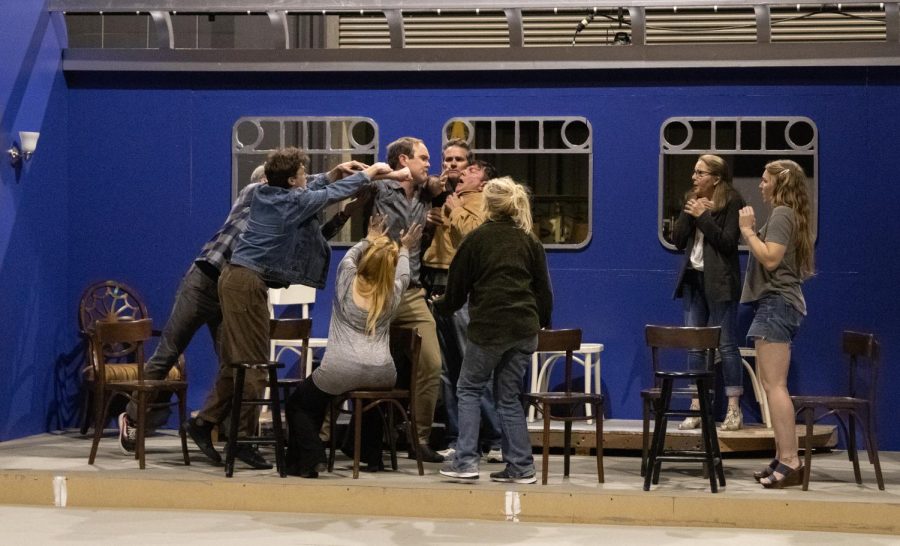 The Theatre Group at SBCC practices a tense scene from "Murder on the Orient Express" on Monday, Feb. 21 at City College's Garvin Theatre in Santa Barbara, Calif. The play will be running from March 2 - 19.

The Theatre Group at SBCC is back in action this spring semester with their first show of the year, Ken Ludwig’s adaptation of the classic novel “Murder on the Orient Express.”

“This play is one of [Christie’s] most iconic stories. It has that feel of the 1930s, we haven’t changed the setting of it,” Director Katie Laris said. “There is this luxury train, the Orient Express…. On the first night out, a murder occurs.”

The story follows the murder of an American businessman aboard a train that gets caught in a snowdrift. A world-famous detective is then brought in and the play unravels into a guessing game of mystery and murder. With the clock ticking, the cast must catch the killer before they are freed from the drift and the murderer escapes custody.

After casting finished in December 2021, the Theatre Group rehearsed every night since Jan. 12, putting in about 20 hours of rehearsal each week.

“It’s been so much fun, the entire cast is extremely talented, friendly, and communal,” actor Sanford Jackson said. “Our director, Katie, is very good at what she does, she runs an extremely welcoming and comforting enterprise… I feel very happy to be here.”

While those involved say working on this show has been a sublime experience, the production itself has been challenging due to its attention to detail.

“The costumes are very elaborate, partly because of the ’30s, and how they’re not everyday clothes. They all have to be very specific to the character,” Laris said, “One of the biggest [challenges] is how the set is very complicated.”

The play takes place in multiple settings, each set including aspects to the play that must be showcased throughout the different locations.

“Orient Express” production is unlike any other the Theatre Group has put on. The set actually moves across the stage, adding to the idea that the characters are on a train.

“It’s the kind of show that many theaters aren’t able to do because the set is so demanding,” the Director said.

“Murder on the Orient Express” is thought to be an emotional and moving play, yet Ludwig’s sense of capturing the heavy content with clever humor will give appreciable entertainment to the City College community.

“This is a great escape from all of the craziness of the past few years,” actor Leesa Beck said. “It really simulates going out into the world and traveling, it’ll be a wonderful way to feel the things you haven’t been able to feel in a while.”

The play runs from March 2-19 at the Garvin Theatre at City College. Tickets can be purchased here.

“Get ready for some adventure, mystery, and laughable-insane characters,” Jackson said.