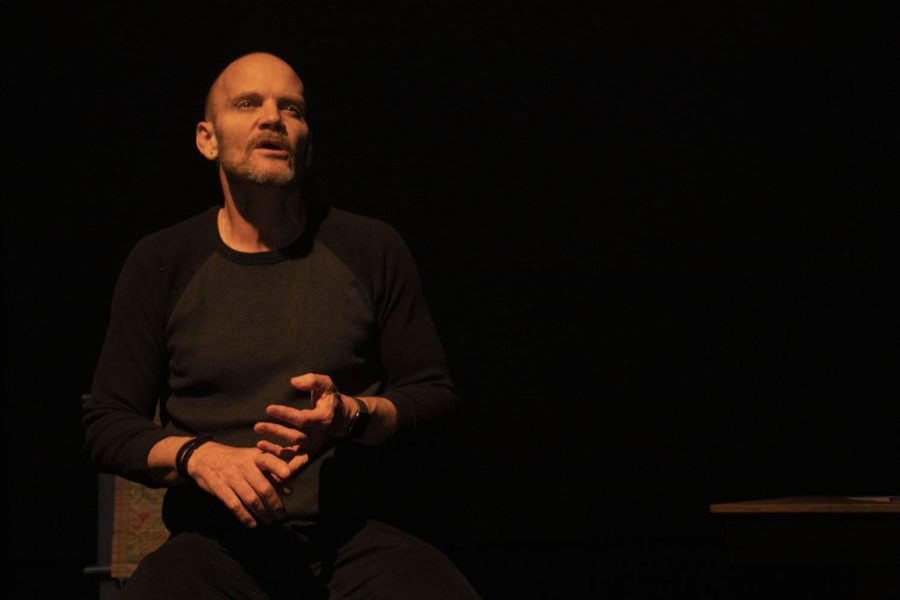 Matt Talbott practices his final monologue during a final run through of his one-man show "Reptile" on Feb. 6 at the Center Stage Theater in Santa Barbara, Calif. Talbott said this play show how the social norms of American culture in the 1970's and 80's shaped Americans to view anyone who was different as weird and to accentuate their differences in order to further ostracize them.

From professor to performer, City College adjunct instructor Matt Talbott, premiered his one man show, Friday at 8 p.m. at the Center Stage Theater where he stood in front of a predominantly white audience and shamed the system in which he himself benefits from the most.

On Friday night, Talbott unveils himself as both the protagonist and a reptile, a metaphor for the monster that fuels a country run by power, money and greed.

He preached the horrors done to others while standing in the skin of one who could never comprehend their true significance.

This evening, students, children, and adults gathered to watch Talbott give the first performance of his one-man show.

The performance was captivating, with flamboyant caricatures, music, visual anecdotes, and props.

He drew emotion from the crowd but other than his comedic executions, his conversations were nothing revolutionary.

As a white man in America, Talbott described himself as a “symbol of whiteness and oppression.” He narrated his perspective holding his privilege in correspondence with a system of broken ideologies that laid the foundation for a patriarchal, racist, and corrupt world.

At times, it seemed as though the purpose of his anger was to relieve the guilt of doing nothing.

Talbott shed light onto many different key points in our history, touching on a vast myriad of issues.
The City College professor discussed the history of racism, oppression, inequality, the amoral foundation of our constitution and the lopsided political parties. However, it seemed as though he was missing an important, revealing layer.
He swam on the surface of the gash at the expense of diving fully underneath the surface to expose the wounds.

When discussing issues of this magnitude, there is a difference between scraping the surface of many major events throughout history and delving deep into an essential conversation that sparks discomfort and controversy.

Talbott executed a perfectly tame discussion. It touched on widely acknowledged arguments and lacked a depth and thoroughness the audience was craving.

Despite the importance of his words and the messages he was sending, no change was made.

“Reptile” was the beginning to a future of work.

The performer used his platform to execute a show that spread awareness that is often overlooked. He put a lot of time into making his words impactful with the hope that day by day the audience will grow.

Ending the show basking in a roaring crowd of standing ovations, his last words involved his wish to “leave the world a better place than we found it”.

Talbott used his privilege to be a voice of advocacy.

This show demonstrated the work we still have to do. Arguably one of the most important parts of activism is to fuel the spark of conversation.

If the audience left with one inspiration, it’s the want to work for something larger.