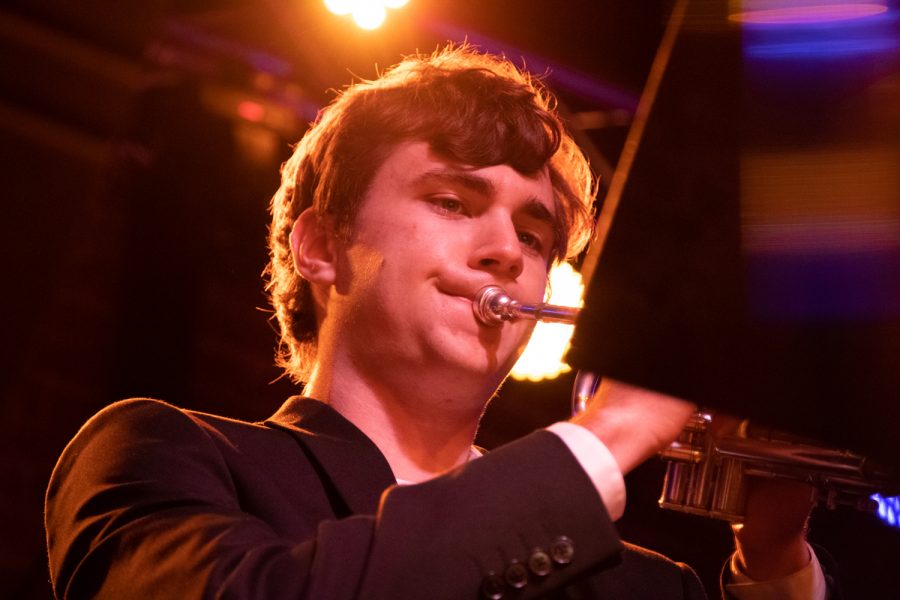 Student Tyler Bates solos on Monday, Nov. 29 at SOhO Restaurant and Music Club in Santa Barbara, Calif. Bates plays for an ensemble led by instructor David Campos, one of four combos presented at the final jazz concert for the fall semester, the “Jazz Jam.”

This was the first in-person show for the quartet of combos since going remote due to the pandemic.

Each performance was fun and exciting, showcasing student talents in entertaining, wholesome and community-building tones. It was an opportunity for the musicians to finally feature the riffs and chops they’d been perfecting while in COVID-19 isolation.

The first act, an entry-level band led by music instructor Ralph Lowi, was a pleasant introduction to what the night had to offer. They featured mostly simple, slow and sensual noir-esque melodies with exotic beats and rhythms.

A high note of the show was the second combo, led by piano teacher David Campos and featuring students Tyler Bates on trumpet and Errol Sullivan on piano.

Although these two beginners techniques were simple, both played with such soul and enthusiasm on the stage that their performances shone through.

However, the energy seemed to dip when leader Campos sat in on one number, playing a beautifully executed 90-plus second intro-solo. The rest of the band, while enthusiastic, seemed tense and more technically focused during the number.

The third band, led by Andrew Martinez, was probably the tightest and most in-tune.

Its lead players, Leo Rubio and Owen Richards on saxophone and Bob Hobber on electric guitar, commanded the crowd. Their play easily summoned thunderous applause one moment then evoked heartfelt silences the next.

The band’s rhythm section, however, was inconsistent and left some listeners feeling uneasy and disgruntled as the base of the performance felt uneven.

Drummer Ethan Fossum had a tendency to sporadically speed up and slow down during solos or particularly long verses. Bassist Theo Brooke experienced instrument-related malfunctions as well.

Fossum’s final drum solo, which evoked rock drummers like John Bonham and Keith Moon, seemed out of place among the band’s other relaxed and jazzy tones.

New World’s highlight, and indeed the highlight of the entire night, was student Jay Real’s composition written during quarantine.

The original piece began with a repetitive, modern and almost electric-sounding piano riff, slowly building as the rest of the band joined in. Throughout it explored several styles, incorporating big-band swing with new-age jazz and soul influences. It was an innovative and modern take on what a big band could do, and the sounds and styles it could produce.

However, the biggest disappointment was their rendition of the Gershwin Broadway classic, “Summertime.”

Flutist Jane Hahn, who took on vocals for the song, sounded strained and didn’t incorporate well against the rest of the band. It felt like a classically trained opera singer forcing herself to sing in an unnatural and unfamiliar bluesy twang.

By the end of the performance, everyone was merry with many rounds of applause, as the City College’s jazz combos left the crowd on a natural high only the magic of live music can conjure.