From online to on stage, theatre department takes final bow for fall 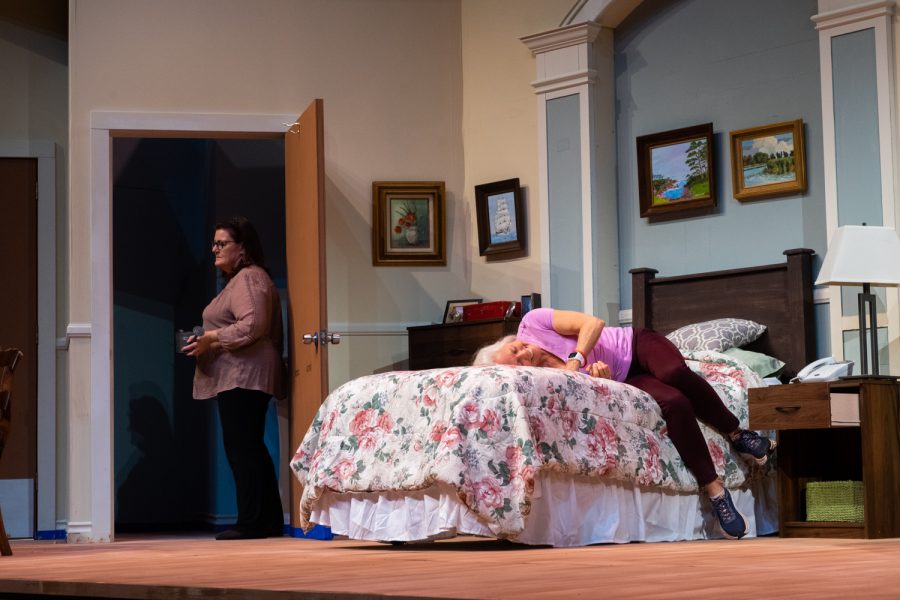 From left, Leslie Story exits the stage as Ann Dusenberry falls on the bed laughing during rehearsal on Oct. 6 at the Garvin Theatre at City College in Santa Barbara, Calif. Story and Dusenberry were the leads in the City College Theatre Company’s production of “Ripcord.”

After one and a half years of not being able to perform in front of a live audience, City College’s Theatre Department triumphantly returned to the Garvin and Jurkowitz Theatres this fall with two plays “Ripcord” and “Laughing with Durang.”

This time around, audiences had to wear a mask as well as be vaccinated or have a negative COVID-19 test in order to enter and watch the shows.

“It was educational. I initially was not planning on acting in an SBCC show, but when asked to audition I decided to test myself… seeing if I could handle it on my ever-growing plate as a working college student.” actor Tyler Witucki said. “I learned from it. I will cherish the quirky memories made with the cast, crew, and friends.”

The first production of the semester was “Ripcord.”

The two main characters, played by Leslie Ann Story and Ann Dusenbery, are roommates in a retirement home. They make a bet between themselves and toward the ending, they end up becoming closer then when they first moved in with each other.

“For this play we did things we have never done before. We have advanced in the technology department and even had actors flying this time” director and department co-chair Katie Larris said. “I could tell that the actors had a blast and we remained safe through it all.”

The characters’ personal items that were used in the double room is what brought the play to life. A bathroom with a working sink, and beds that were constantly being used The second fall play, “Laughing with Durang,” featured six plays by Christopher Durang and was performed at the Jurkowitz Theatre.

“I could feel the joy in the air. It was mine, along with many others, first shows in a very long time because of COVID and you could tell this was the moment everyone was waiting for,” actor Kristina Clark said. “This energy flowed through the whole rehearsal process and even shows, which made it one of my favorite productions to be a part of.”

The light beams and projectors pointing at the stage were controlled electronically by the stage crew instead of manually — how it’s traditionally done in a theatre.

Another change in this past semester was how not all seats were sold. Because of COVID-19, there was a limit on how many members in the audience could attend.

“All I can say is that it has been a beautiful thing to be back. It has been such a joyous gift to be back in the theatre again after a two year hiatus,” director Matt Talbott said. “It was like being held underwater and finally, at long last, emerging at the surface to take a long deep breath.”

Auditions for the next show “Agatha Christie’s Murder on the Orient Express” have already been held and the production will open in early March 2022 at the Garvin Theatre.