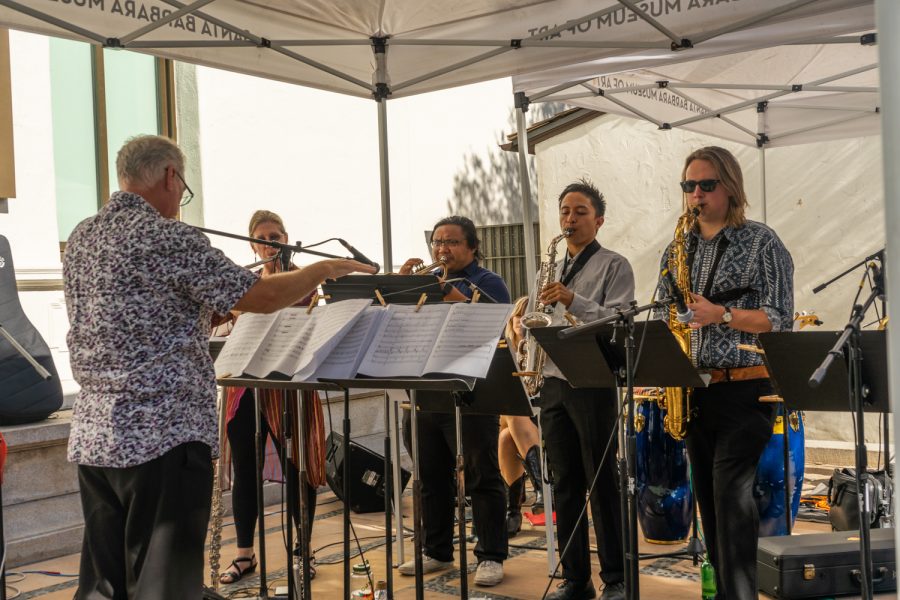 Edward Smith, City College New World Jazz Ensemble Director, conducts the band through their final composition of the day on Oct. 9 on the terrace of the Santa Barbara Museum of Art. Each student wrote their own composition based on pieces from the museum.

The sunny day and subtle breeze created the perfect weather this past Saturday, Oct. 9 for “The Sound of Art,” a musical performance in collaboration with the Santa Barbara Museum of Art and Santa Barbara City College.

“The whole purpose of this is to use the inspiration of something,” said Ted Nash. “When you use something like a beautiful painting or something that really moves you and then you use your imagination, you say ‘okay how does it express those colors?’ and then you have everyone take different approaches to the art and how they expressed it musically.”

Nash, from the Lincoln Center Jazz Orchestra, composed the Grammy-nominated “Portrait in Seven Shades,” a suite in seven parts inspired by modern artists who were alive during the “apex of jazz” as listed in the program. Nash used this same technique with the students, who wrote original compositions inspired by pieces from the museum.

Before the performance, each member came up and spoke on their reasoning behind choosing their piece and explained what the audience would be hearing as they played.
The music was a mixture of playful tunes and minor chords, conveying the emotions of their piece of art. It helped set the tone for downtown State Street as many stopped to enjoy the music or listened from the comfort of their tables at a nearby coffee shop.
Gabriel Rangel, the second performer of the show, spoke about his approach to his composition.

“There were a lot of ups and downs for me, but there were moments where I had such inspiration. I took inspiration from different pieces of music I listen to and took it from there,” he said.

His piece was influenced by the artwork “The Hunters” by Grandma Moses, which depicts a snowy day in the woods. Members of the audience described it as “a song I want to listen to on Christmas,” as it emulated the soft cozy tunes heard in holiday music.

Pianist Azik Rogers came up with the progression as he analyzed Kay Sage’s painting “Second Song,” a painting that to him was reminiscent of a human.

“I brought a little keyboard into the museum with me when we did the walkthrough,” Rogers said. “I went home and put it together. I was picturing it in my head for days and days jamming on this chord progression until I landed on something I liked.”

His song kept a consistent sound and featured a solo.

When student and last act of the day Jay Real saw the painting “Fireworks in the Cool of the Summer Evening at Ryōgoku Bridge” by Utagawa Kuniyoshi he immediately thought of contrast.

“I wanted to tell a story of a bunch of people gathering at a festival,” Real said when presenting his work, with pride evident in his voice that paired with the skills he has developed over the years.

Through the program, students were able to be fully wrapped into a composer’s process that challenged their musical and thought-processing skills.

Many in the audience of all ages smiled through the show and gave a standing ovation to the work of the ensemble.

Under the direction of Nash and City College Assistant Professor Jim Mooy, “The Sound of Art” proved to be a success amongst the crowd, and the vibrancy of the music was shared onto the street.