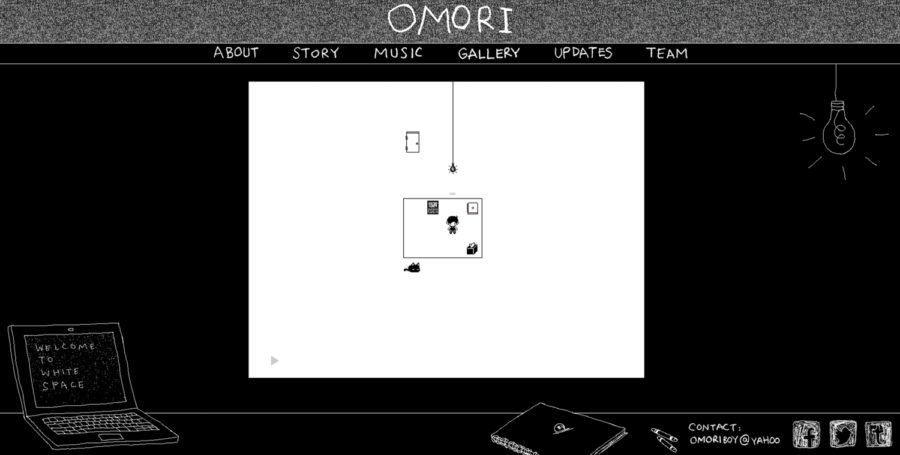 The home page of the Omori website. The psychological horror game was created by Asian American artist Tiffany Liao.

In December 2020, after seven years of waiting, online gamers and horror-genre buffs were gifted with the psychological masterpiece Omori.

Developed by Asian American artist Tiffany Liao, known more commonly as OMOCAT, Omori tackles heavy topics such as grief, guilt, self-hatred and overcoming fears and trauma all while maintaining an upbeat, colorful and cheery atmosphere for the player to marvel at, before starting a slow but sure transition into the psychological horror game as advertised.

The game begins in an area called the White Space.

As its name suggests, this entire zone is blank, lonely and soulless, save for the player-controlled character, Omori, a box of tissues, a cat, a sketchbook, a laptop, a black light bulb and a door looming eerily in the distance.

It is your job to find a way out, enticed by the world beyond the recesses of this nothingness.

Beyond the strange door is the Headspace, a more vibrant and less-lonely expansion of Omori’s state of mind.

In the next room, you are greeted by an entourage of your childhood friends that consists of the cheerful Aubrey, the goofball Kel and his charming older brother Hero. Lastly, joining the cast is your older sister, Mari and fan-favorite Basil.

In the final stages of the game, it becomes a dark, nail-biting and nightmare-inducing experience. As reality seeps into your perfect bubble, the dream world around you becomes a lot more twisted.

Even as it becomes darker, the game still manages to keep the player feeling comfortable with flamboyant scenery and characters/enemies—like Captain Spaceboy, who can’t seem to catch a break with his half-donut girlfriend Sweetheart, and Mr. Jawsum, a shark who runs a sleazy hotel and resort.

One of the highlights of Omori is that there is no shortage of characters you’ll meet, as the Headspace explores the limitlessness of a child’s imagination mixed with an unhealthy dose of real-world memory.
It’s addicting. Once I started playing, I couldn’t stop. I was glued to the edge of my seat, getting up only to use the bathroom and take meal breaks.
I first learned about Omori from my friend Sam, who begged me to play. I’m glad I caved into her peer pressure because even now, 4 months later,  I still obsess over it, wishing again I could play it blindly and jump down the rabbit hole that is the Headspace all over again.

Each location is a change of scenery for those who grow sick of seeing the same thing over and over, and nearly every place in the game has a unique and beautiful soundtrack.

With no option to change your difficulty in settings, the player must rely on strategy to pull through. The enemies get harder and harder as the game progresses, as does the mirage that makes up your character’s fragile state of mind. Like classic role-playing games, each decision you make affects your character’s path.

Omori is a very slow burn that loves to tease you with moments that force a double-take, but when it gets real, it’s worth every second.

In my opinion, every second spent playing Omori is worth the 10/10 score received by videogame distribution service Steam, and I urge you to give it a try. You will not be let down.