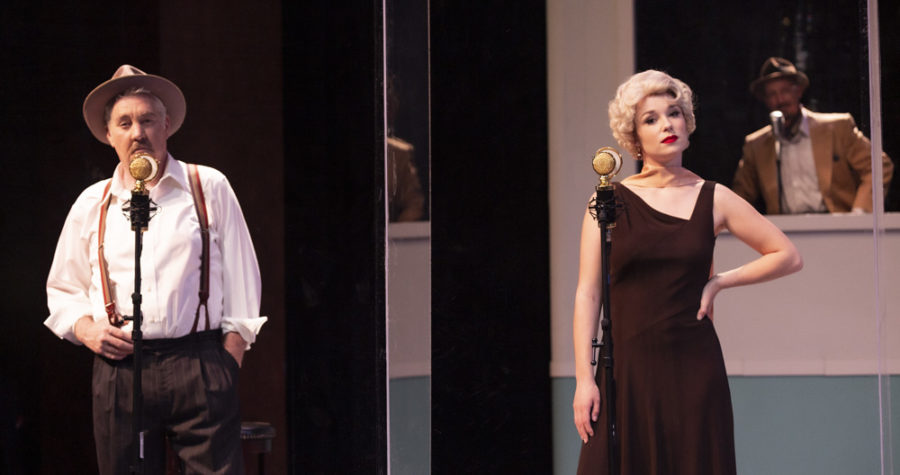 A witty world of sleuthing and socializing takes center stage in The Theatre Group at City College’s spring performance of the crime classic “The Thin Man.”

Presented as a live radio drama based on the original 1936 Lux Radio Theatre script, the show will be available for streaming beginning April 21 and running through May 8.

“The demands of COVID meant that the style of theater was somewhat limited for us,” said Director Katie Laris. “We knew that if we took on more of a radio show format that we could maintain social distance.”

According to Theatre Manager Pam Lasker, the college had to give permission to allow filming at the Garvin Theatre. Special COVID-19 precautions addressed the number of people present and how far apart they were during filming, with separate plexiglass stations and microphones for each performer.
The story follows former private eyes Nick and Nora Charles, and their dog Asta on a stay in New York City. There, they become entangled in a murder mystery surrounding the three-month disappearance of a prominent inventor.
A live foley artist provides the atmosphere for the show, using various methods to create the sound effects that bring the world to life. Director Laris highlighted a scene featuring a character walking alone down the street where the sounds were made by using period shoes on a piece of tile.

“It’s a lot of fun and has a polish that a lot of theater productions don’t have because of the filming,” said Robert Allen, who plays Chris Jorgenson. “We got the best performance from every person in the cast.”

Based on Dashiell Hammett’s 1934 novel, “The Thin Man” has been successfully adapted to multiple media platforms over the years. It became the first of a six-film series that was nominated for the Academy Award for Best Picture in 1934, as well as an NBC television series running from 1957-59.