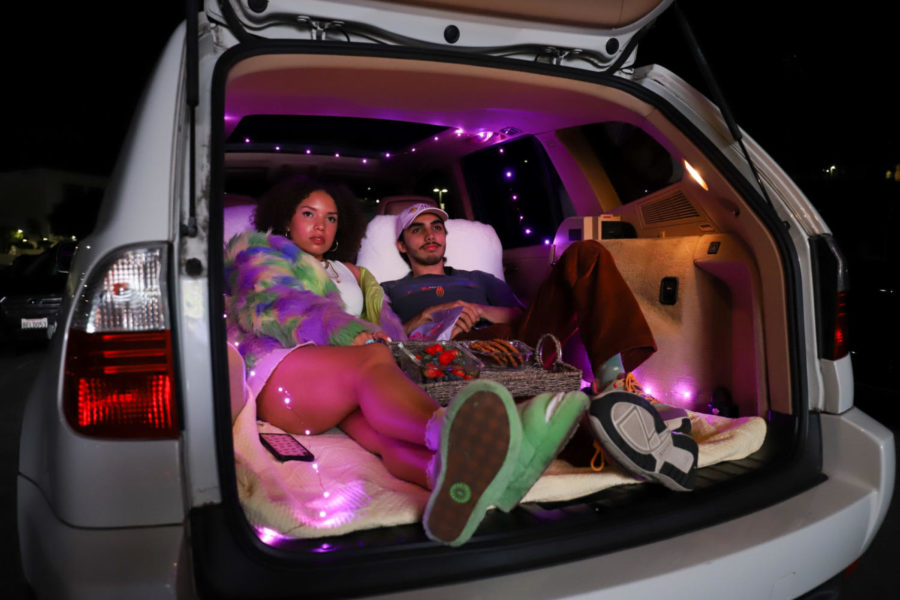 Influencer and City College alumni Bianca Williams and her boyfriend Jade Grenada attended the 36th Santa Barbara International Film Festival under sponsorship from UGG on March 31, 2021, at the temporary drive-in movie theater in the parking lots of City College in Santa Barbara, Calif. UGG is one of the bigger named sponsors for the festival.

Two large LED screens have been constructed, in compliance with COVID-19 regulations, in the campus parking lots near La Playa Stadium and Shoreline Drive to provide a free drive-in experience for Santa Barbara cinephiles.

Reservations for the drive-in’s 80-plus screenings are required for admission and are available each morning at 8 a.m. All films, tributes, and panels will also be accessible for online viewing.

Roger Durling, the festival’s executive director, said it was never a doubt that this year’s version would be replaced.

When the idea of a shoreline drive-in theatre popped up, Durling wanted to bring the sense of community that many have lacked in the past year.
“It was important to have a sense of connectivity, a sense of continuity, a sense of optimism and positivity,” Durling said. “Even if we’re in cars, socially distanced and safe, at least we’re together and that’s what tonight is all about.”
The drive-in screens were installed and presented by Toyota Mirai, and both feature adjustable brightness levels for visual clarity during the day or night. Durling said the brightness level is usually kept lower at night and can be cranked up all the way up for daytime screenings, providing a high-resolution image.

The opening night film, “Invisible Valley,” made its world premiere at the festival with director Aaron Mauer and producer Zachary McMillan in attendance.

“Invisible Valley” documents the contrast of lifestyles between the undocumented farmworkers and wealthy residents in the Coachella Valley, and explores the impact that the acclaimed music festival has on the local community.

“It took a lot of time hanging around the valley and getting to know the people there,” said Mauer in an interview with The Channels. “We had to earn their trust.”

The film highlights the particular struggles of the undocumented migrant farmworker’s lives, echoing the overall struggles of undocumented workers in the United States, and is just the first of many showings during the festival.

With over 80 film screenings to choose from, the drive-in showings will continue daily with films playing from 8:30 a.m. to 8:30 p.m. until April 10.