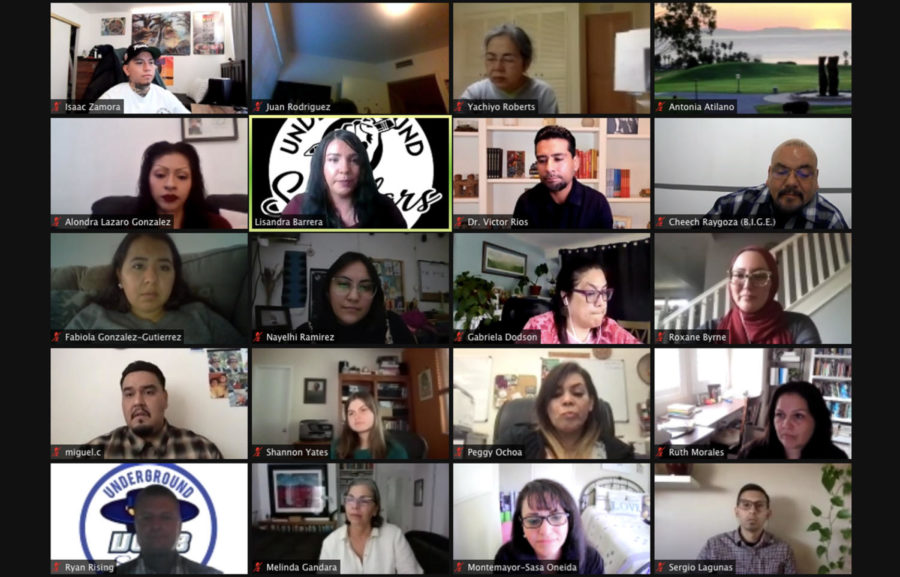 Participants attend the CESJ's showing of "The Pushouts'' documentary talk together over Zoom on Tuesday, March 11, 2021. Around 40 people attended the screening that was hosted by a panel of Chicano students from the past and present.

They didn’t drop out, they were pushed out.

“One in three Black and Latino children in the U.S. grow up in poverty,” is the opening line of the documentary “The Pushouts.”

“One-third will not graduate high school. Two-thirds of these ‘Pushouts’ will end up in the criminal justice system.”

The Center for Equity and Social Justice screened the documentary on Tuesday, March 11 and hosted a panel of past and present Chicano students who have benefited from the Transitions program for formerly incarcerated individuals.

“We see a lack of representation in higher ed,” said organizer and CESJ advisor Alondra Lazaro Gonzalez “We need to be available to motivate and guide.”

“The Pushouts” tells the story of millions of alleged “dropouts” in America who are pushed out of school for reasons beyond their control.

The screening was held over Zoom, with around 40 spectators in attendance.

The movie follows Victor Rios on his quest to reach out to underprivileged students and inspire and guide them through high school graduation into college.

“School was a cold place with little connection to teachers,” Rios said about his youth.

He talks about the school-to-prison pipeline that underprivileged students experience through no fault of their own. He said he hopes to change the system from marginalizing students that need help outside of the classroom, to being supportive of everyone’s emotional needs and mental well-being.
“When you talk equity you have to talk systemic change,” Rios said. “It’s time for the community to start investing in our young people.”
The word “dropout” blames the student, whereas “pushout” holds the educators accountable. In order for students not to be “pushed out” of school it’s best to have a support system of community and family, not just a counselor they rarely see. He said educators need to step up and show they care.

“It’s not just mentoring our young people, it’s sponsoring them,” Rios said in the movie.

After the screening there was a panel of City College alumni, Miguel Cruz and Isaac Zamora and the founder of the Underground Scholars of Santa Barbara Lisandra Barrera Rising.

Each answered questions on the struggles in education and shared personal battles they overcame.

For Cruz, graduating was the last thing in mind during high school. He grew up in gang violence and saw no value in education.

“I was better prepared to go to prison than to go to college,” Cruz said.

But thanks to support from City College, Cruz is now a drug and alcohol counselor.

Zamora, who is currently majoring in Psychology at UCLA, credits the community at the Transitions program for where he is today. He admitted he struggles with substance abuse and that he’s been sober for four years. He was in-and-out of the jail system as a youth and wants to help others who went through similar experiences and to offer support to those who need it.

“We’re in places that weren’t built for us,” Zamora said. “It means a lot to have a place of positivity.”

All panelists said that the support programs they found at City College were exactly what they needed to succeed.

“When you talk equity you have to talk systemic change,” Rios said. “It’s time for the community to start investing in our young people.”