‘Selena Live! The Last Concert’ connects me with family, heritage 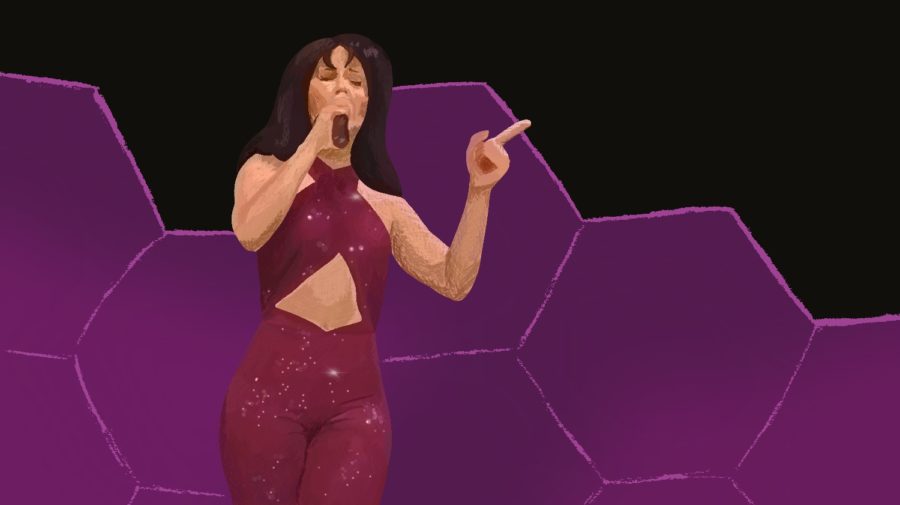 Digital illustration of Selena Quintanilla-Pérez during her 1995 concert for her album “Selena Live! The Last Concert.”

Selena Quintanilla-Pérez is a Tejano music artist who blended her love of disco music with the more traditional sounds of the genre. She created something totally unique in her career and it all came together in this performance.

Selena’s powerful energy on stage is contagious and it’s preserved forever in her album “Selena Live! The Last Concert.”

That 1995 concert was her last live show and knowing that makes the album so much more touching. It’s this intense moment of joy right before tragedy can live on forever.

The album starts with “Disco Medley,” a mashup of songs by Gloria Gaynor, Lipps Inc., Van McCoy and Donna Summer.

At that point in her career, Selena could confidently blend cultures but before she broke down barriers, Tejano music was strictly Spanish-speaking. She carved a space for herself in the genre and created something special that speaks to me as a multicultural person.

I can imagine her dancing around the stage in that legendary sparkly-purple outfit while listening to the album.

I remember watching the concert for the first time in kindergarten and trying to emulate her dances, spinning around the room.
Her music is a bridge between Mexican and American culture. I use it to connect with my Mexican immigrant parents.
My mom had a Selena album on cassette and it got so worn down that she had to tape it back together. Selena’s music has always been something we can enjoy together.

There’s magic in a live recording.

Wherever I am in life, I can put on my headphones and get transported to the arena.

I could play the disco medley on loop forever and never get bored of it. It’s a strong beginning to an unforgettable concert. The rest of the album features some of her greatest hits.

Selena is a strong performer because a lot of her songs tell stories and she is able to transmit that feeling into the audience.

She can seamlessly go from an emotional song about forbidden love into another about dancing cumbia and keep the same energy.

One of my favorite songs on the album is “Si Una Vez (If One Time.)”

All the musical elements work together to tell an intense narrative about heartbreak and regret. You can feel the pain in her voice even if you don’t understand Spanish.

Nearly 26 years after the concert, Selena’s legacy holds its influence. She was one of the first Tejano artists to really break into the mainstream.

I grew up bilingual and I still have a difficult time with both English and Spanish. She inspires me to embrace both languages and cultures in my own way.