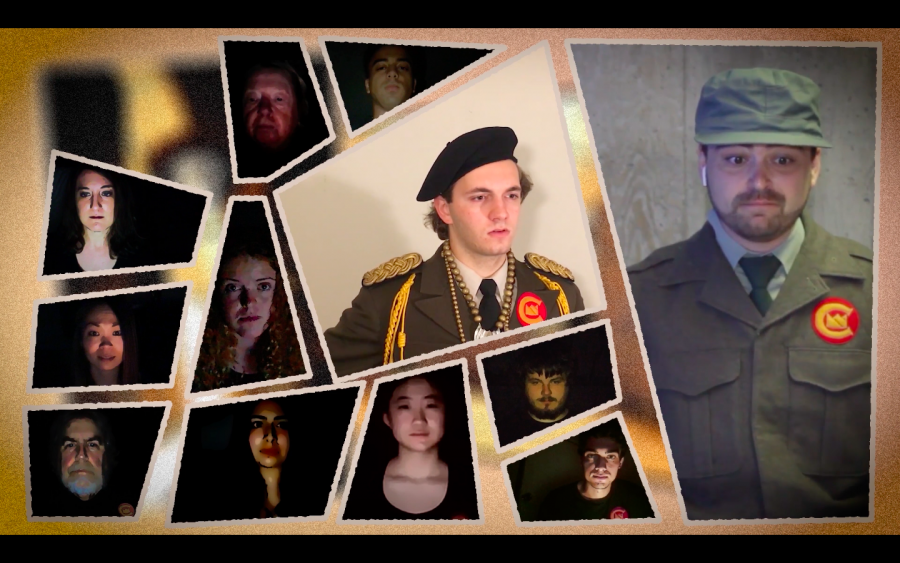 Colby Jordan Noakes (right) plays the Watchman and Tyler Witucki (left of Noakes) plays King Creon in City College's performance of Antigone that will be showing from Nov. 14-30 during the evening through the online streaming service VBO tickets.

Since the cast and crew couldn’t actually get together to perform the play, each cast member recorded their individual parts to create a 90-minute feature-film of the edited recordings.

The movie was set up like an epic novel, with different characters in different panels interacting with each other from their own separate boxes.

“Antigone” tells the story of King Creon and how he forbids any of his subjects from properly honoring the dead body of one of his enemies. Antigone, the sister of the king’s enemy, disobeys the king and gives her brother a respectful burial.

The play asks the question of when a leader goes too far, and “how long is too long for that king’s people to stand and do nothing?”

The play was directed by Michael Gros.

One of the highlights of the night was Colby Jordan Noakes as the Watchman.

His comedic timing was impeccable during screen time, and the clownish way he would deliver his lines brought a much-needed offset to the otherwise dramatic production.

Although, at times it did seem like he was blatantly reading his lines while recording. Noakes was constantly looking down while he spoke and stumbled on phrases as if he had just learned them the night before.

Visually, the comic-book format engineered by the film’s editor and Technical Director Ben Crop was the perfect solution to the social-distancing problem the production faced. Each actor had their own panel making their separateness easy to accept and fun to follow.

The ingeniously-entertaining and original epic novel set up was a welcome departure from what has become the common Zoom-meeting format for plays.

However, some blatant technical malfunction did take place about an hour into the film.

One of the chorus’ windows picture drops out and we see, instead of her performance, a multi-colored error screen in her box. And then again 40 seconds later, another chorus member’s picture is cut off.

This happens again in the final scene as another chorus member’s visual is cut off and replaced by error bars.

However, the shining star of the show was Tyler Witucki in the role of King Creon.

With confidence and precision, Witucki commanded the screen with every scene he was in.

As a power hungry tyrant he was frightening and encompassing yet awe inspiring all at the same time.

One could easily imagine Witucki as a leading man in Hollywood movies or as a regular on prime time TV, like American Horror Story.