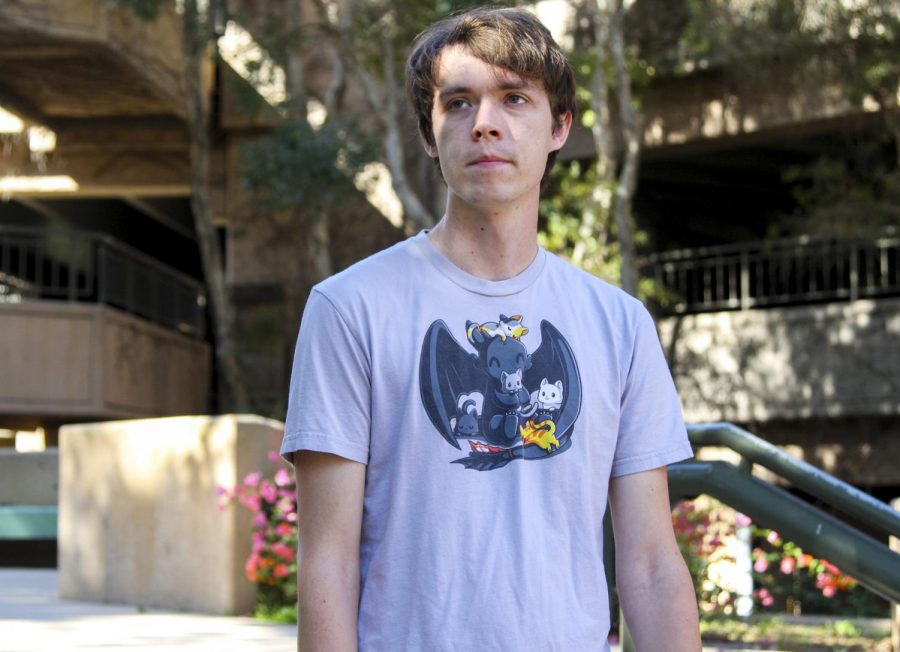 Marcus Olivas, president for the Anime Club at City College outside City College West Campus Cafeteria on Nov. 4, 2020, in Santa Barbara, Calif. Olivas started the club two years ago, initially as a platform for people to meet and play video games together.

Being social was never easy and making friends was something of a challenge for City College student Marcus Olivas.

But he always felt confident with anything that had to do with anime.

“Most [of] my friends at City College I’ve met through the Anime Club,” said Olivas, president of the club. “I didn’t really have very many friends before joining the club.”

The club gives students a chance to meet individuals who are interested in anime, manga and related culture by offering synchronous series/movie watching, multiple ongoing chat rooms with ways for students to share original art and a platform for open conversation related to anime.

Because of COVID-19, the club meets over the online social platform Discord.

Much like Olivas, clubs were always an easy way for Spitzer to make friends, so joining the club was a natural transition when he was a new college student.

“Once I found the anime club,” said Spitzer. “It was pretty easy to meet others with common interests.”

The club has been playing the new space-age contagion game “Among Us.”

Every Friday night members can suggest movies and get a chance to vote on titles they’d like to see.

Some movies they’ve seen include “My Neighbor Totoro,” “Konosuba” and “Pom Poko.”

Members meet in a Discord room and whoever has the movie will screen share. Members usually stay and talk well into the night after showings.

“It’s more of an enjoyment thing than a deep talk,” Olivas said. “Movie nights are more just to hang out.”

Smaller, spontaneous meetings are also held throughout the week.

Spitzer said if members want to start a multiplayer game then all they have to do is send out a club-wide announcement over the server and within 15 minutes a team will have logged on to join.

“We have three voice chat rooms for gaming,” Olivas said, explaining that up to three live games could be played at once on the club server.

It’s not uncommon to log on and find an impromptu “Minecraft” game in mid-play or a sub-group discussing anime memes or bashing the series “One Piece.”

Besides gaming and movies, the club hosts ongoing chats about manga comics and collectible action figures.

“Usually there’s around 45 people logged on at any time,” Spitzer said. “It’s not one general chat, there’s specific chats for specific reasons.”

The club was first founded by student Tony Ochoa in the fall of 2018 as a way to meet friends.

It originally met at 5 p.m. every Tuesday to play themed games, like Anime Pictionary or “Super Smash Bros” and to discuss the latest anime releases and news.

Olivas couldn’t believe his luck when he first heard about an anime club.

He can recall his first meetings with the original club on campus.

“We’d stayed pretty late,” Olivas said. “The security sometimes had to kick us out.”

These original meetings are where Ochoa and Olivas first grew close. The two are tight friends today, and they credit the club for their continued friendship.

The club originally had around 60 people signed up at one time. Now in its digital form, the club brags a membership of around 135.

Be it a series, movie or manga, the club members encourage anyone interested to email President Olivas with any questions or simply log on to Discord and join City College’s Anime Club directly.