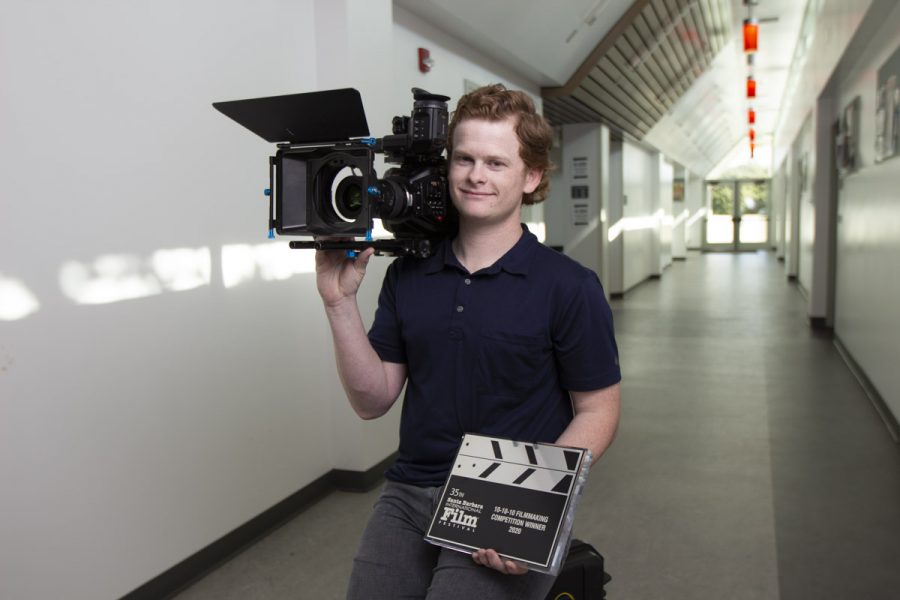 City College student Will Hahn sits in the hallway of one of his favorite buildings on campus, the Humanities building, holding the award for Best Director from the Santa Barbara Film festival with his camera on Feb. 18, 2020 at City College in Santa Barbara, Calif.

By accident, Will Hahn was put into a film and television production class at Santa Barbara High School.

This mistake would change his life forever.

This year, the 20-year-old City College student won the best director of the college participants for his 10-10-10 film “The Goatman” at the Santa Barbara International Film Festival.

“I always wanted to be an engineer, but I’m not good at math,” Hahn said. “I’m more creative, or an idiot as others say.”

At the 10-10-10 competition, 10 screenwriters and 10 directors from high schools and colleges are paired with each other to make a 10-minute film.

Together with screenwriter and City College student Troy Wullbrandt, who chose the script “The Goatman,” they conquered the competition.

They rented an Arri Alexa camera, often used for feature films, and went from there.

Rainy, cold dark nights did not scare off the team as they were determined to show the audience and jury what they are capable of.

Hahn and Wullbrandt did not do this alone, a team of nearly 30 City College students took on the project to make sure it earned a podium place.

“I called Ethan because I knew he would make it look good,” Hahn said.

City College student and cinematographer Ethan Steiners had been in the competition himself a year earlier but was ready to make this an award-winning film.

“It was challenging,” he said. “We put a lot of effort into it and it showed.”

“The Goatman” is an “80s-inspired comedic satire” in which a group of film students prepares to make a horror movie with a dark twist.

City College student and co-producer Amanda Patterson said that working on the film was a blast.

Months went into the planning, so in detail that the crew knew every single step the actors were going to take.

“I didn’t think we were going to win,” Hahn said. “To hear my name called as a winner meant a lot to me.”

Hahn emphasizes that he couldn’t have done this without the team, he doesn’t see this prize for only him, it is one for the team.

“I also didn’t think we were going to win,” said Steiners, who could not attend the ceremony. “But it felt good, this was a team effort.”

Having a tight community helped the students with this project, and will be a helpful resource for many more coming.

“We have this uncanny talent pool here,” Hahn said. “It all looks professional.”

Film students keep close contact with each other and are always busy with some project, said Hahn.

Hahn is unstoppable after his victory and is not planning to slow down any time soon. One decision in high school changed his life forever, now he aims to make directing films his career.

He is focusing on the future, but for now, while on cloud nine, he’s enjoying his team’s victory.