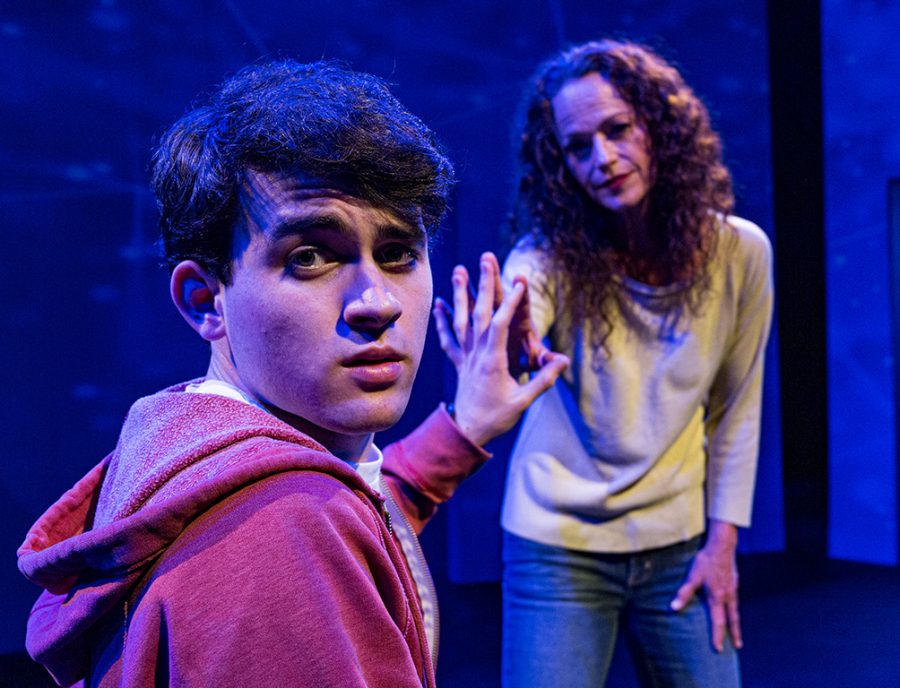 Daniel Sabraw and Clare Carey in the Theatre Group production of The Curious Incident of the Dog in the Night-Time.

Packed with mystery and emotion, the Theatre Group gave a captivating performance for a full Garvin Theatre during the opening of “The Curious Incident of the Dog in the Nighttime.”

From the mystery of a dead dog to a father lying about his deceased wife, the play drew you in and kept you there.

Daniel Sabraw was the brightest star of the evening, taking on the role of 15-year-old Christopher Boon with excellence and raw emotion.

Shabraw acted out the role of Christopher so well that at times you wanted to get on the stage and comfort him when his character broke down hysterically crying on the floor.

The play, based on the novel of the same name written by Mark Haddon, has had successful runs on Broadway and at the National Theatre in London.

And Director Katie Laris’s interpretation is not any less.

With a very minimalistic set, the ensemble themselves played out the roles of furniture and props. In the beginning this seemed rather strange, such as when Shabraw’s fellow actors lay down beneath him forming a bed or spinning around the floor to resemble a microwave.

Luckily the dazzling visuals and sound effects in each scene made this work, and even feel authentic.

The play opens in the garden of Boon’s apartment building in Swindon, England, where Christopher finds Wellington, the dog of his neighbor, killed with a garden fork.

The boy is immediately eager to make himself the detective on the case and find the person responsible. But struggling with social anxiety and autism, solving the mystery brings him challenges as he steps miles outside of his comfort zone.

The audience follows the situation unfold from the perspective of a boy whose world is full of literal observations and for whom making a conversation is seen as a marathon in achievement.

“Most people are lazy, they don’t look at everything,” said Christopher in the first act. “But I see everything.”

You feel for him, and almost sense how he feels about the world.

The script is well written, giving examples of how Christopher’s mind works and how he experiences his surroundings.

“Some people see some brown or black cows when passing a field. I see 32 of them,” he said at the end of act one.

Not only can you see behind the scenes of a person struggling to function in a world where he is considered different from all his peers, we’re also invited to take part in his thoughts as he does.

From the lens of Christopher’s life, the audience is further invited to connect with the people surrounding him, such as his parents, and get an intimate look at their relationship through struggle and love.

He lives alone with his father, a broken man whose wife left him for another, but who tells Christopher that she has passed away. It’s a messy relationship between the father and son that escalates when the truth catches up, and the secret enters the surface.

You feel inspired to follow Christopher’s journey as he faces his fears. It’s emotional and captivating, every moment and line in the first act adds to the suspense.

However, the second act comes and goes on for longer than what is necessary to tell the story. The performances from the actors were still strong, but it tended to get slightly repetitive at the end. Also, although the play is set in England, is the fake accent really necessary? Calling someone “mate” and “lad” in every other sentence adds up for a poor British imitation.

Yet, still, it’s a beautiful story about a young boy who’s struggling to fit into the world and learns to do so in his own unique way as he faces his fears, realizing that he can do anything if he just believes in himself.

The takeaway message to get a better understanding through the eyes of a person who has a different perspective of the world is important, the acting is very strong and Shabraw’s performance is unforgettable.

“The Curious Incident of the Dog in the Nighttime” runs until March 14 in the Garvin Theatre.