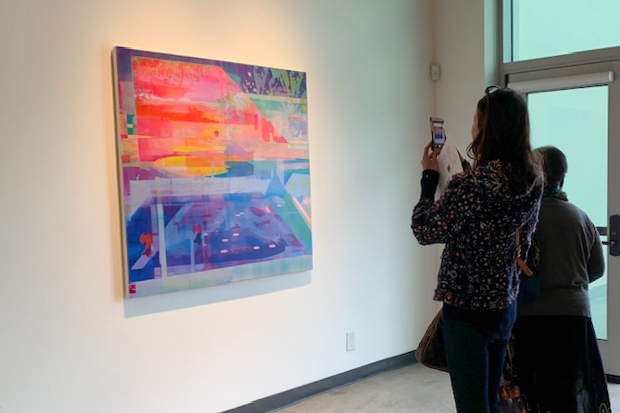 The Atkinson Gallery unveiled a vibrant and colorful second edition to the exhibition “Eleven Figures In Two Parts” last night that surprised visitors with an underlying theme.

Local artists, students and art enthusiasts alike visited the event, admiring the different mediums and expressions while taking in the overall scene. Every piece had character, thought and care put into them, and it shone through.

“Art feels like it should poke to one’s perception and this exhibit accomplishes that,” said Alan Macy, founder of the Santa Barbara Center for Arts, Science, and Technology.

Multi-layered and colorful images named “Prism and Lens” and “The Peripheries of Love” by Los Angeles artist Zoe Walsh are the stand-out pieces of the show.

Walsh said they draw inspiration from photograph archives dating back to the late 70s from the pornographic magazine Falcon Studios.

Then Walsh puts the images through SketchUp, a digital modeling program, to give shape and depth to the flat objects. Finished up with Photoshop for the layering effects, the image is then screen printed onto canvas using acrylic.

In regards to the color scheme, Walsh said they were thinking of the cycles of day and night, and choosing colors that are opposite each other, but when put together have a harmony.

“Everything in here is dope,” said City College student Azana Pasipo. “The layered acrylic piece really pops which makes your eye gravitate towards its intensity, and all the different things going on in it.”

Although the overall theme of the gallery is human figures, there is a subliminal theme of webs in the show as well.

The darkly satirical piece named “It’s dark and hell is hot” by David Leggett proudly displays a golden web on a black background, and dark glitter lettering that spells out “black hate.”

Directly across is the work by Mario Ayala, which, among other images, features a crash dummy taking off a human mask behind a chain-link fence. It also has a web across the painting.

A web pattern is also present in the rope of the intricate hanging sculptures by activist and artist Tanya Aguiñiga.

“I’m just thrilled that there’s a gallery that shows contemporary art,” said Waxberg. “If young people don’t see the art, they aren’t part of the discussion.”

“I kind of saw it when I was planning out where I was going to put the works,” Connelly said. “It’s a motif I didn’t plan for, but I’m glad that it’s there.”

“Art is transformative,” Connelly’s husband Frederick Janka added. If you don’t see things differently, how can that change your perspective or life?

“This exhibit is of color, it’s queer, it’s what we need. If it gets too white and straight, it gets boring.”