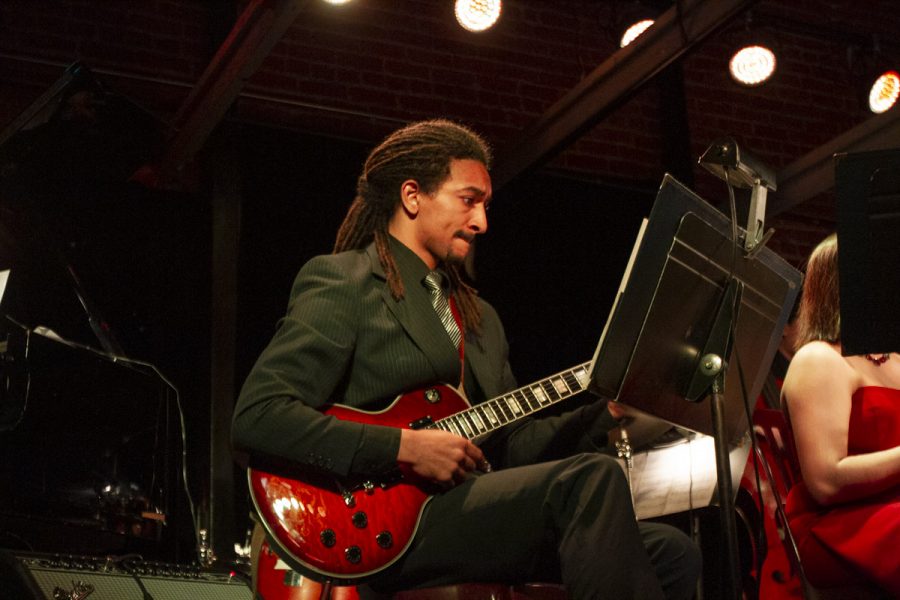 Brandon Kinalele plays the guitar during the first Jazz Ensemble Concert of the season on Monday, Feb. 10, 2020, at the SOhO Restaurant and Music Club in Santa Barbara, Calif.

City College’s jazz bands started the spring semester off with the “Jazz Ensemble Concert,” a powerful show that took place at SOhO Restaurant and Music Club.

The Good Times Big Band Jazz Ensemble, led by Eric Heidner, kicked off the night with an epic jazz rendition of the main title from the 50s film, “Exodus,” that captivated the audience immediately, continuing with slow ballads “Delphine Nocturne” and “Ballad for Benny.”

The last song for the Good Times band a new one to the band’s set, another hit called “Mars: the Bringer of War” by Gustav Holtz.

“SOhO is a great place to play because we can add new songs, experiment with improvisation lengths and solo orders,” said trombonist Kevin Roman.

With the speed of the song’s rhythm, other-worldly drums, smooth sax and trombone solos, made for a memorable end for the first part of the show.

“It was fabulous, as always,” said concertgoer Mary Lopez. “The trombones were the star of the night.”

The evening continued with the New World Jazz Ensemble under the direction of Tony Ybarra.

The ensemble continued with a couple of other fast tunes, including truly remarkable work by trumpeter Sergio Rodriguez.

As the night came to an end, the Lunch Break Big Band, led by Jim Mooy, played an incredible set even bringing back a couple of songs that the band hasn’t performed in years.

It began with a smooth piece titled “Time After Time.” Followed by the songs “Just” and “Around,” the latter featuring a female student vocalist.

The band also showcased the bass standard “Doodle Oodle,” which was played at an incredible speed.

It continued with the polyrhythmic song “Liberty City,” and an entertaining three-part trombone solo and battle for the closing song, “What Is Hip?” Featuring a funky improvisation on a Korg synthesizer for the first time.

The show had an overall low attendance, providing an intimate setting.

Even with low attendance, the audience that showed up had a good time jamming to the hits.

“I think tonight was a success,” Roman said. “If the audience enjoyed it, then we did our job.”