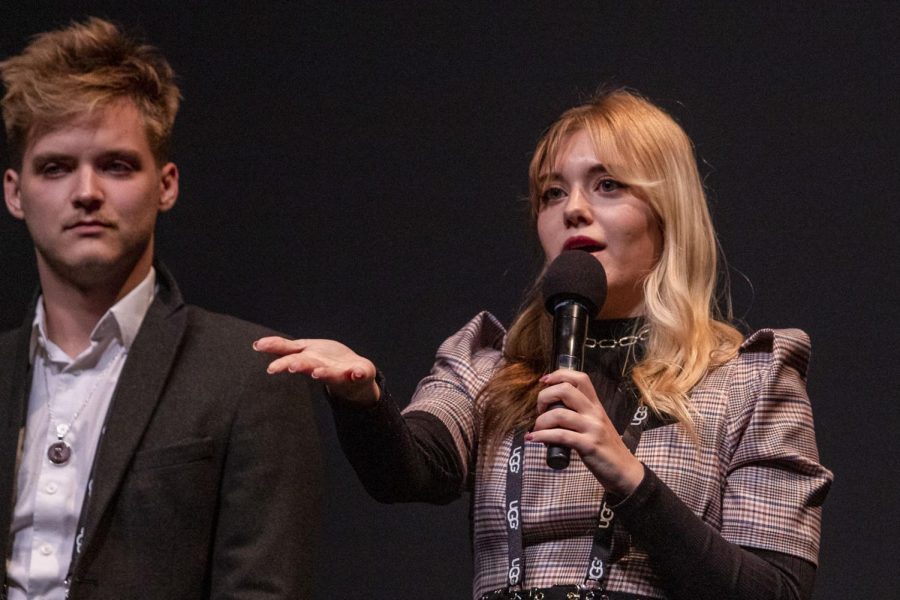 Alara Worrick explains the process on how the short film "Earache" came to be on Sunday, Jan. 19, 2020, at the Arlington Theater in Santa Barbara, Calif.

The Santa Barbara International Film Festival showcases hundreds of films a year, but the unnerving silence of Alara Worrick’s short film “Earache” stood out among others.

“I’m pretty excited,” said Worrick, a City College student and the film’s director. “It’s the first time seeing it on such a big screen.”

“Earache” was screened alongside five other local short films.

The film’s dialogue is almost entirely in American Sign Language, with the lead actress being deaf herself. Worrick emphasized the importance of representation, especially in a film about “standing up for yourself.”

The lack of spoken dialogue in the film makes for a quiet, moving experience.

With minimal scoring, the few sounds that are heard are intentional and novel, such as guitar playing or the click of a camera shutter.

The film is also visually stunning, with beautiful shots and lighting. The set design is detailed and genuine, letting the viewer’s eye focus on the action.

The mother is deaf, but it isn’t shown clearly throughout the film. Her lack of arc as a character made her seem like a plot device whose only purpose was to be the antagonist.

Her motivation for her abuse towards her daughter is never explained beyond briefly alluding to her religious ties.

The film’s dialogue, however, is strong where the plot is weak.

The lines are clever and well-placed.

A specific interaction between Claudia and her mother was able to summarize their dynamic in two short lines.

“He will never love you like I do,” the mother said. “Good,” Claudia replied.

The film is a product of the City College Capstone program, the most advanced class a film student can take, and was shown alongside five other short films on the fifth night of the festival.

“We submitted it and hoped for the best,” said Worrick of the selection process.

“It kind of reminded me of the college application process,” said Cinematographer Ethan Steiner.

Steiner sat anxiously awaiting the screening. “I can’t do art without putting emotions into it,” he said.

And emotions there were. The film, in all of its visual glory and occasional confusion, had a strong impact.

The acting, combined with the excellent camerawork and visuals, made for a powerful and emotional mess.