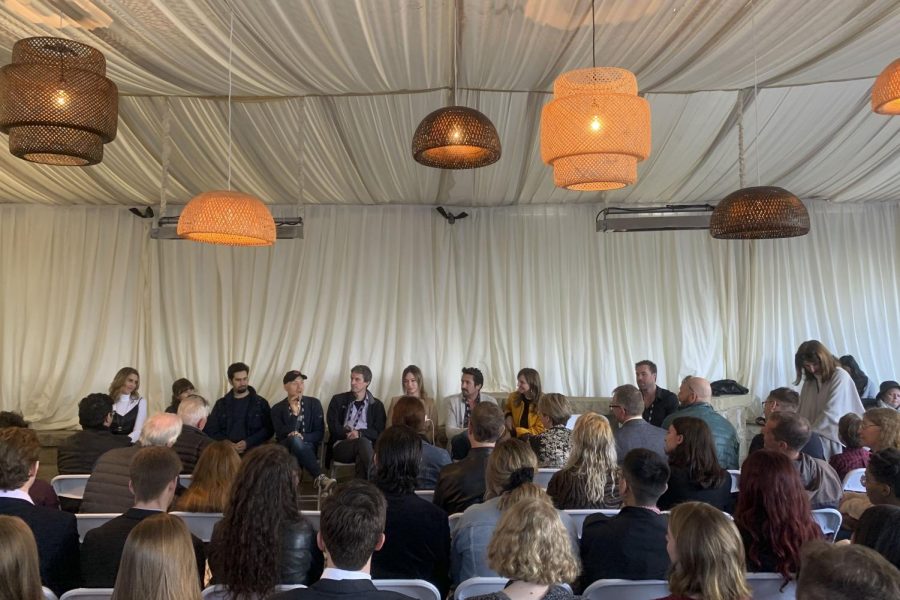 Independent filmmakers lined up to answer questions during a seminar on Friday, Jan. 16, 2020 at the Lobero Theatre Courtyard in Santa Barbara, Calif. The seminar is one of the many events that the Film Festival class visited.

Film and Media Studies Instructor Nico Maestu knew when he began teaching at City College that he wanted to get his students out of the classroom and into the real world of cinematography.

Nearly 12 years later, he still gets a thrill out of introducing his students to professionals and showing them that a career in the industry can be rewarding and exciting.

“You are surrounded by people who are devoted to film,” said Kirsten Anderberg, a film major at City College. “If you want to network, this is the best place to be at as a student.”

Maestu said he had always been intrigued by the study of film and movies, graduating from UCLA with a degree in fine arts.

Maestu created the film festival studies class at City College in 2007 and took students on the first field trip to the Santa Barbara International Film Festival in 2008.

“Other departments go on field trips, so why can’t we go on one?” Maestu said.

Students in the class receive free passes for all the films shown at the festival and are required to write 10 reviews for the class’s website.

“I love film festivals,” said Maestu. “And this is a good way to get students out of class.”

The three-unit class is only in session for the duration of the festival.

The course is brief but demanding, with students often out working from 9 a.m. until 10 p.m. with a few breaks throughout.

“You don’t have a life for two weeks. It is very intense, but it is all fun,” said Anderberg.

Maestu teaches students how to write a review, going over the basics of cinema and what to look for in films.

He accompanies his students to film screenings, panels and seminars where students can interact with actors and directors.

During the Fall semester, Maestu also takes his students to the AFI Festival in Hollywood for five days.

Maestu said students are enthusiastic about the class, so much so that some students take the class multiple times to go to both festivals.

“The Film Festivals Studies course that Nico Maestu coordinates is a fantastic way for City College students to see films at AFI and SBIFF,” said Michael Albright, a film studies instructor at City College and the programming director for SBIFF.

Students that complete the course get a taste of what it is like to work in the industry and can gain real-life experience that few other classes offer.

“They get to meet people they always thought were separate from them, but now see that they are just like them,” Maestu said. “Hopefully [the students] realize they can do the same as all of them.”