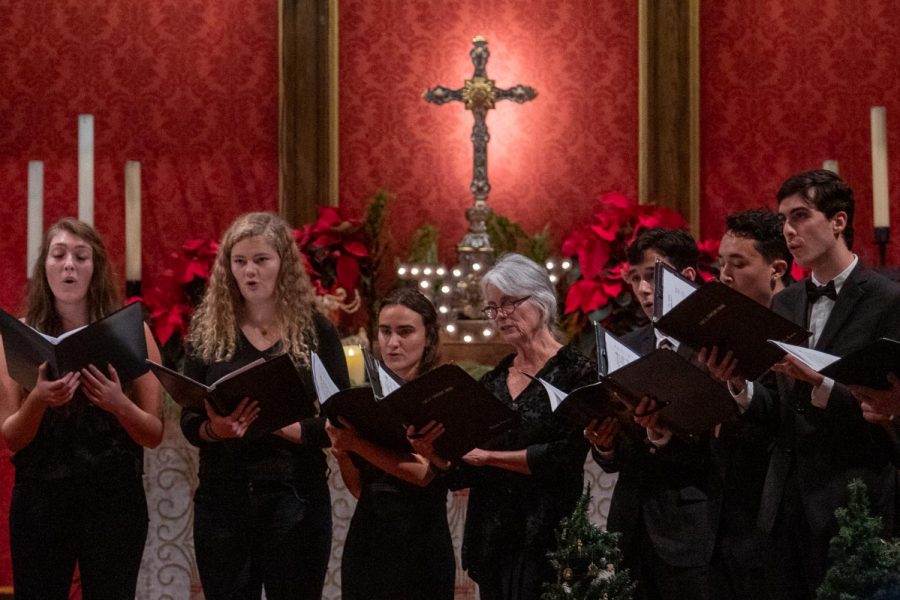 Three of City College’s choirs, SBCC Concert Choir, Chamber Singers, and Women’s Choir came together in harmony at the First United Methodist Church in Santa Barbara on Saturday for their end of the year show.

Directed by Music Department chair Nathan Kreitzer, the “Winter Choral Concert” showcased the hard work the choirs had been working on over the semester.

The Trombone Choir did a great job getting everybody in the Christmas spirit as they started off the show, conducted by Cody Anderson.

Students of all ages lined up at the front of the festively decorated church.

The trombone ensemble performed popular holiday carols such as “Holly Jolly Christmas,” “Baby, It’s Cold Outside” and “It’s the Most Wonderful Time of the Year.”

Anderson introduced each song with a light-hearted manner and brought humor to the performance.

Towards the end of “Holly Jolly Christmas,” the choir began to dance along to the song in unison while the audience clapped along to the beat.

Next up, Kreizer brought the Chamber Singers to the stage.

He began by introducing an important member of the group, Debra Brinkman, who has been apart of Chamber Singers and Women’s Chorus for over 20 years. She is also a professor in the English department at City College.

Their voices echoed beautifully throughout the church as Kreitzer conducted.

The audience was captivated, remaining silent and paying full attention.

One of my favorite things about the concert was the range of ages in each group.

“SBCC is a college that brings the community together, we have all ages and levels of musicianship,” said Kreizer.

For the final and largest performance of the night, the 68-member Concert Choir took over the stage. It was fascinating to hear their voices harmonize. Each note hit perfectly by the soprano, alto, and bass groups.

Not only did the choir have the audience intrigued, the accompanying pianist and saxophonists effortlessly played their instruments while they serenaded the crowd.

While the other choirs added funny transitions and humor to a few of their songs, the Concert Choir went along with a more earnest performance of classic pieces.

The large group sang a total of seven songs, a few favorites of mine were “Star in the East” and “Sweeter Still”.

As someone that hadn’t been to a choir concert in recent years, I wasn’t sure what to expect. It was a great experience and a wide variety of music that could appeal to everyone in the crowd.