Jazz ensembles end semester after a crescendo of notable shows 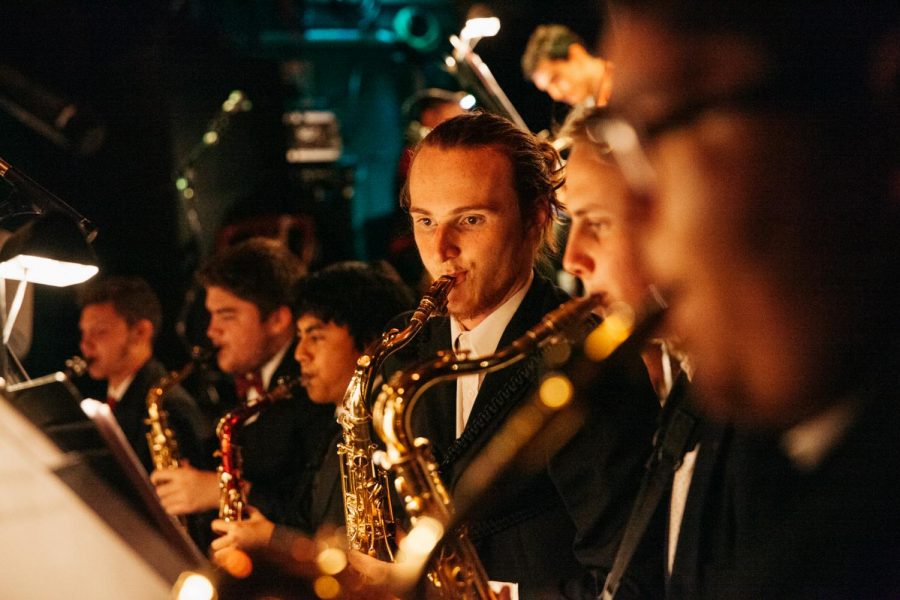 From the highs, like sharing a stage with a seven-time Grammy winner, and the lows, as the concerns of the Applied Music being shut down came to a head, the fall semester was a wild ride for the City College’s jazz bands.

“This semester was an awesome experience,” said Douglas Swayne, a second-year music major. He has played multiple brass instruments in the school’s multiple groups and ensembles.

“There are so many amazing directors and musicians that came together,” Swayne said.

Earlier this semester, the Lunch Break big band performed to a standing ovation while opening for Grammy winner Michael McDonald.

McDonald has worked alongside rock and soul stars like Aretha Franklin, Doobie Brothers and Steely Dan.

“That was an exciting night,” Swayne said, “It’s inspiring to perform to a packed house.”

Lunch Break, which got its name because rehearsals are twice a week around lunch lunchtime, is City College’s competition level band.

This season the ensemble played the Azusa Pacific University Jazz Festival and will perform the Seattle Jazz Festival next January.

This semester, the band’s particularly difficult setlist challenged its players, pushing them to become better musicians, able to deliver in a professional environment.

“[Lunch Break] has taken me out of my comfort zone musically,” said guitarist Theo Wheeler. “I’ve learned to play with people better.”

Heidner’s goal is to introduce new players to a professional big band environment.

“This is a band that has greatly improved compared to past bands,” Heidner said. “They’ve gained more out of this semester in music education.”

Amidst the exciting semester, it seemed as if the Applied Music program, an intensive course that distinguishes City College and attracts music majors from around the world, was in danger due to low funding.

In the end, the program pulled through and will continue to be offered, thanks in large part to the new Department Chair Nathan Kreitzer.

Swayne felt that the struggle brought the department closer as a community.

“It made us stronger,” Swayne said. “We came together.”

Banners announced “WE DID IT!” in celebration of the Applied Music win have since been posted around the music building.

The group is made up of local professionals, music teachers and department alumni and under the leadership of Andrew Martinez.

As one of the band’s trombonists, Heidner fondly recalled sharing the bill with Goleta Valley’s Junior High jazz ensemble earlier in the semester and emphasized how rewarding it was.

“It’s great to see young musicians coming up,” Heidner said. “Then they got to watch what their potential future could be.”

Martinez aimed to guide Madness on a more modern path over the fall while staying respectful to the classic spirit of jazz.

He felt the ensemble “has come together like never before,” and is honored to be apart of it.

Although the semester had its moments of both adagio and harmony, City College’s jazz bands can look forward to years of growth and prosperity.

“I wouldn’t trade it for anything,” Swayne said.