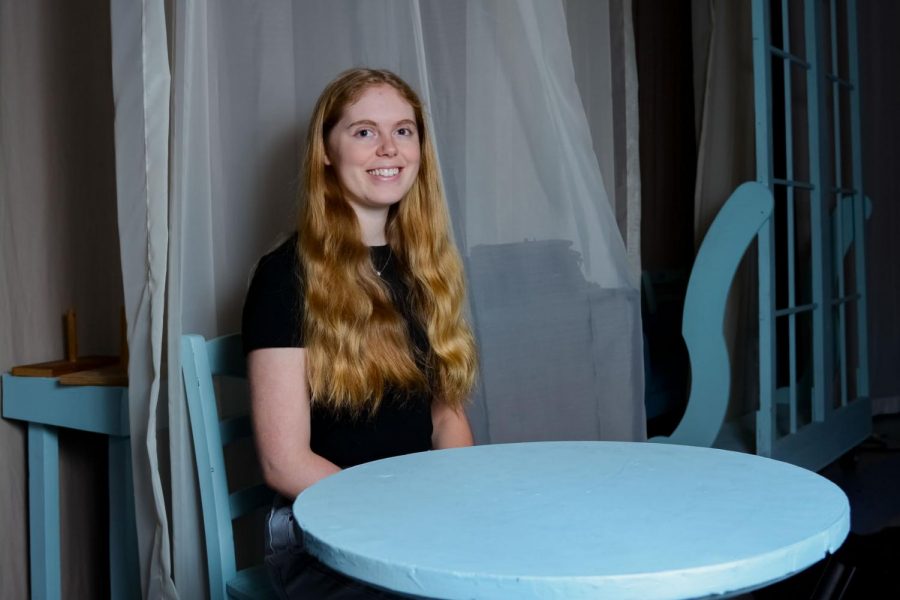 Penny O'Mahoney on the set of the play "Sense and Sensibility" by Jane Austen, currently playing in the Jurkowitz Theater on West Campus at City College in Santa Barbara, Calif. O'Mahoney is playing the co-lead role of Elinor Dashwood along with a cast comprised of fellow City College students.

Coming to City College, Penny O’Mahoney was looking for a new start. With previous theater experience under her belt, she was ready to expand her horizons.

However, after realizing that nothing else interested or inspired her as much as theater, she made a choice to pursue it.

In junior high, she did not share the same drive.

A hesitant O’Mahoney was ready to drop her theater class until her theater director, Shannon Saleh, encouraged her to stick around, a decision that paid off.

O’Mahoney credits Saleh for encouraging her to pursue theater and for believing in her when she was ready to quit.

“I think that her believing in me when I was about to quit performing, that really helped me,” said O’Mahoney. “She showed me that this was something I could do, and something that I wanted to do.”

After graduating from Santa Barbara High School, O’Mahoney said “it just seemed like the natural next step” to pursue her acting career.

“I had seen shows [at City College] and I had heard a lot of good things. I also wanted to take advantage of The Promise Program,” O’Mahoney said.

“I first saw Penny perform in ‘Hair’ at Santa Barbara High, she was part of the ensemble,” said Laris. “I was really overjoyed when she decided to come to City College.”

In particular, Laris commends O’Mahoney’s unique way of getting into character and digging into challenging roles.

After getting the co-lead of the role of Elinor Dashwood in City College’s current production “Sense and Sensibility,” she prepared by spending a lot of time memorizing her lines, working with her co-lead Miranda Ortega, endlessly going over lines and scenes.

Laris said that her portrayal of Elinor is “rational, decent, moral and epitomizes a good person.”

“It’s not at all an easy part, and I think she really has taken that on and really has made that character likable and understandable,” Laris said.

Elinor Dashwood makes O’Mahoney’s list of favorite characters to play because of how challenging the role was to portray.

Her personal favorite musicals include “Chicago,” “Cabaret” and “Hair.” The latter was her first play in high school. The message of love and acceptance in the play helped her grow as a person and get her out of her comfort zone.

O’Mahoney feels at home when she’s on stage.

“For me, I think it’s just a wonderful way to connect, not everyone wants to get on stage but it is a way for the actors and the audience to share stories, to have that shared experience amongst everyone in the room,” she said.

City College’s theater department has helped her find her community.

“It’s made me even more passionate about theater,” she said. “It’s such a great group and everyone is so talented.”

O’Mahoney is currently applying to primary performing art schools and plans to continue pursuing her major in Theatre Arts.