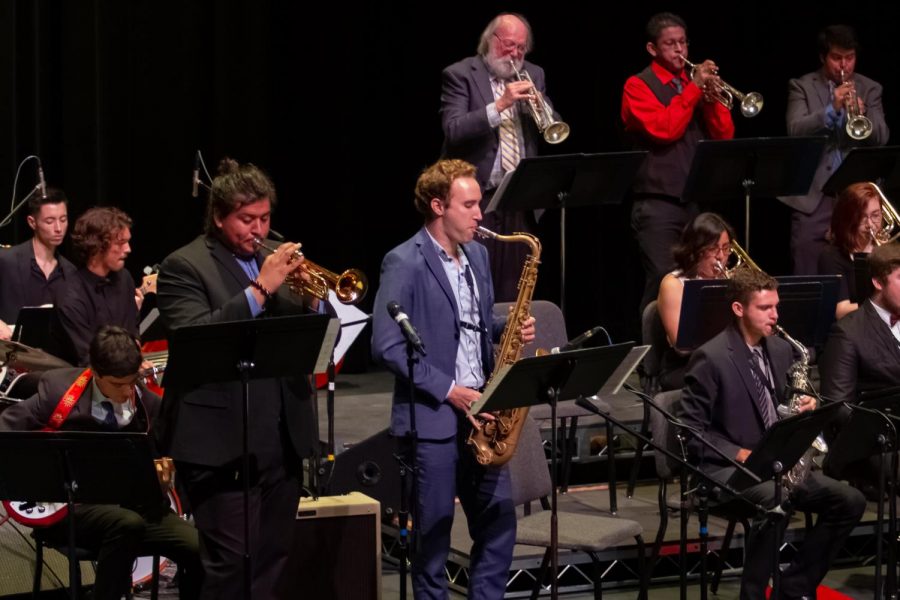 Kevin Roman on the trumpet and Matt Krepky on the saxophone performing a duet for the Good Times Big Band during the Jazz Ensemble Concert on Monday, Nov. 18, 2019, in the Garvin Theatre at City College in Santa Barbara, Calif.

The “Jazz Ensemble Concert” featured all three of City College’s jazz groups in the final performance of the semester.

The Good Times Big Band directed by Eric Heidner kicked off the evening with the crooning “If I Should Lose You,” a song made popular by the late Nina Simone.

With tight drum fills by drummer Bennet Ariza and a swooning brass section, the band came alive and welcomed the audience to an evening of music.

Up next, the band presented “Ballad For Benny.” It featured an excellent clarinet solo by Vincent Capello, supported by the cushion laid down by the brass section. Although the song had a few rough bits, the band hit its stride.

It was followed by “Greasin’ the Skids,” an ode to New Orleans street jazz. There were some awkward moments with this one, namely the guitar solo and a few dodgy notes from the trombone section.

The romping number was held together with a screaming trumpet solo reminiscent of Louis Armstrong by Kevin Roman, who Heidner mentioned had only been playing the instrument for a month.

Up next was the sauntering “A Country Boy,” featuring trombonist Isabella Duncan front and center. The solid number showed the interaction between musicians and allowed the lead trombone to drive the song.

The only drawback of the number was the heavy handedness of drummer Tyler Herzog, whose snare and tom hits often boomed over the mix.

Good Times closed out its set with the rocking “Beat 70” which displayed how tight the ensemble was. Rapid drum fills and bullet-like hi-hat hits supplied by Ariza kept the band in motion. With bassist Tim Beccue right behind, it just goes to show that a good rhythm section makes a good band.

Lunch Break took the stage after the Good Times.

After a quick count off, Lunch Break was in gear with the lively “Doodle Oodle.” Immediately, the musicianship of the band shone through. Sprinting sax solos just keeping up with the breakneck pace of drummer Aeron Price gave the song perpetual forward momentum.

Next, the band took a swing at the contemporary “Around,” featuring Paula Shin on vocals. The song is incredibly complex, and the band managed to pull off all of its changing time signatures, albeit after an awkward start.

Shin’s vocals lacked projection, unfortunately, and made it hard to hear what she was singing about.

The band hit its stride in the ambitious closing number “I Saw Her Standing There.”

Before the count in, Mooy instructed the band to “just have fun with it.” It seemed there was an unspoken code between the musicians that they were about to blow the audience’s mind.

The funky take on the Beatles classic was a hit.

The cover had bits that stayed true to the original, with instrumental breaks allowing various instruments to fill out the vocal melody. However, the song came alive when saxophonist Eli Nania and trombonist Grey Ingersoll stood up and started rapping.

It was a unique moment that, on paper, shouldn’t have worked, but Lunch Break pulled it off, and the crowd ate it up.

In the last act of the night, the professional ensemble Monday Madness led by Andrew Martinez blew the roof off the Garvin.

Immediately, the opening number “Come Fly With Me”  introduced the audience to the rich, barking brass section. The brief number was enough to bring the energy back from intermission and run with it.

The band followed up with “Common Ground,” which was kicked off with an extended, almost honky-tonk like piano solo by pianist George Friedenthal.

Throughout the number, Monday Madness showed the interplay of its musicians. To an average passerby, it would seem like the ensemble had been playing together for decades.

Cole Porter’s “Easy to Love” came next. The number showcased the strength of Madness’s saxophone section. The different parts eased so well with one another it seemed the saxes were mingling and having a conversation, weaving in and out of each other’s way.

In the absolute highlight of the night, trumpeters James Watson and Mike Muench shared lead duties on the timeless “Over the Rainbow.”

The evening was brought to a close with “Abducted Aliens,” a tune inspired by an alien keychain. Before the count off, Martinez paid tribute to the former late Madness director Ike Jenkins.

“Thinking about you Ike, always,” he said.

The grand, menacing piece showed off the band’s dynamics once more and left the crowd on its feet cheering for more.

All in all, the concert displayed the sheer talent of City College’s jazz ensembles and showcased the hard work they’ve been doing this fall semester.