SBCC play captivates audience in a story of love and heartbreak 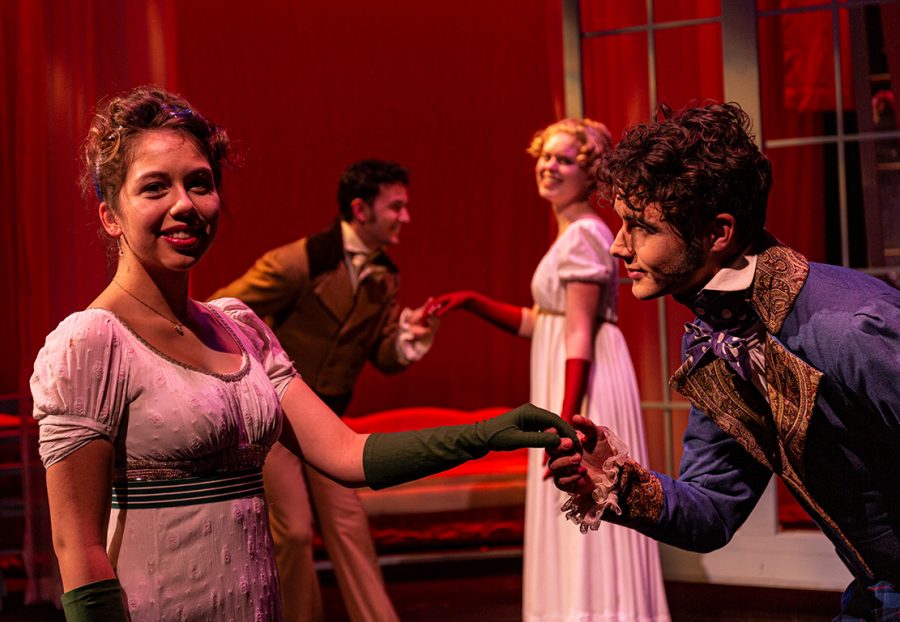 The play captured the attention of the audience right off the bat in the first scene of the show when the body of the late Mr. Dashwood, father of the play’s two lead protagonists, falls from the ceiling.

Adapted from the classic Jane Austen novel, “Sense and Sensibility” depicts the love and loss that accompany growing up and adapting to a new life. The Dashwood sisters, Elinor and Marianne take center stage in the timeless narrative.

The play had the audience engaged with laughter from the beginning, especially when the “gossips” who are always lurking and waiting for news of any new fortune or misfortune, were on stage.

Both sisters deal with the constant pressure of trying to find a husband. They lean on each other during times of trouble and heartbreak.

The Theatre Group’s many rehearsals have paid off, taking the last eight weeks to perfect the show and the many scene changes in the small Jurkowitz Theatre.

Many actors took on more than one role in the show.

Like last semester’s production of “Significant Other,” director Katie Laris tackled the constraints and challenges of the Jurkowitz to successfully bring Austen’s tale of loss and love to life.

The lead actresses, Penny O’Mahoney and Miranda Ortega, gave everything they had out on the stage. Their chemistry helped depict just how vital the relationship between the Dashwood sisters is to the story, and how both of their characters deal with heartbreak and betrayal.

One notable character that had the audience laughing from beginning to end was Mrs. Jennings, played by Robert Allen, who made his City College theater debut in the show.

This play truly can speak to many generations as it is a timeless classic, with a feel-good ending that left the audience booming with applause.

“Sense and Sensibility” runs until Nov. 23 in the Jurkowitz Theatre.