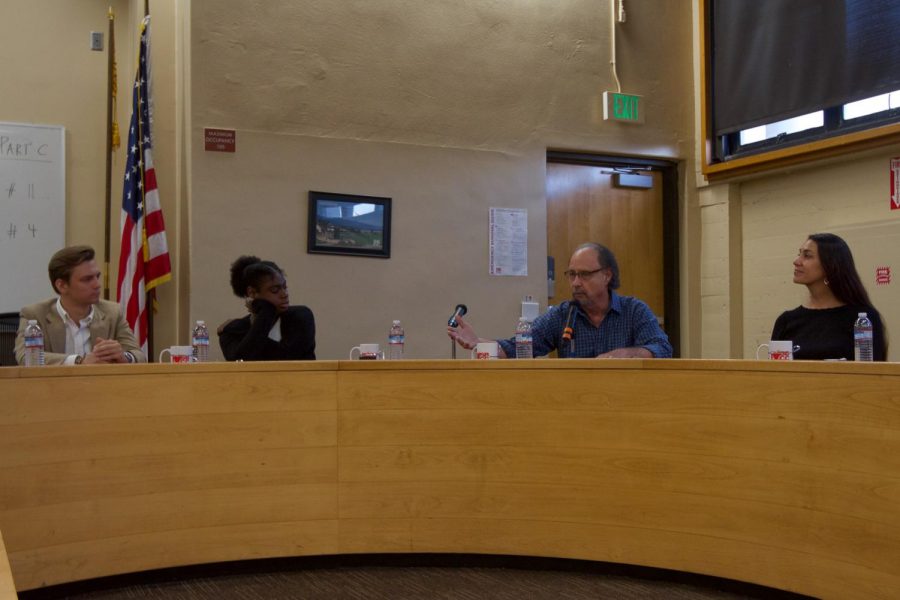 Second from right, Therapist and Antioch University Professor, Stuart Light addresses the alcohol problem within the college community and says that it correlates with social anxiety on Wednesday, Oct. 16, 2019, in the administration building at City College in Santa Barbara, Calif. Light was one of the four panel members to speak for the Movies for Mental Health event.

A diverse community of mental health advocates and specialists gathered on Wednesday night in the MacDougall Administration Building Room 211 for “Movies for Mental Health,” an event put on to discuss mental health difficulties that are often met by societal stigma.

The event, made up of a film screening and panel discussion, was hosted by The Well in collaboration with the Disabled Student Programs and Services and the non-profit organization Art With Impact.

Seth Pickens, a representative from the non-profit, said the organization is dedicated to providing resources to those who struggle with mental health and spreading awareness about the subject in general.

“The biggest thing for us is to empower students to get over their limitations and find the courage to overcome the stigma surrounding mental illness,” Pickens said.

Art With Impact works to dissipate the negative stereotypes associated with mental illness. The organization encourages young filmmakers to submit short videos confronting the realities of mental illness, incentivizing creators with a $1000 prize if they are selected as the monthly winner.

Short films were shown to the audience with revealing portraits of emotional and mental affliction, highlighting the isolation which can be spawned from mental illness.

The winner from last year’s Art With Impact Short Film Competition “A Short Film About Anxiety” by Lily Rose Thomas and Stephen Isaac-Wilson offered insightful glimpses into the experience of people who suffer from anxiety.

This month, The Well has been hosting many events and workshops to stimulate the discussion around mental health.

“We are doing something revolutionary and progressive,” said Rebecca Bean, the student program advisor for the Well. “We want The Well to be a safe place where students can come together and express themselves.”

The center seeks to create a community of individuals striving towards both physical and mental wellness, giving them the tools they need to find success.

The film screening was followed by a panel and discussion that emphasized the necessity for at-risk students to take advantage of resources offered by City College such as the six free counseling sessions with a school counselor.

As the event came to a close, Jeremy Siegel Steffen, student president of The Well Club, spoke about the mental hurdles he’s had to overcome in life and why he believes his assimilation into The Well community has been beneficial to him.

“A lot of people internalize their issues,” said Steffen. “We just want to open up a conversation.”