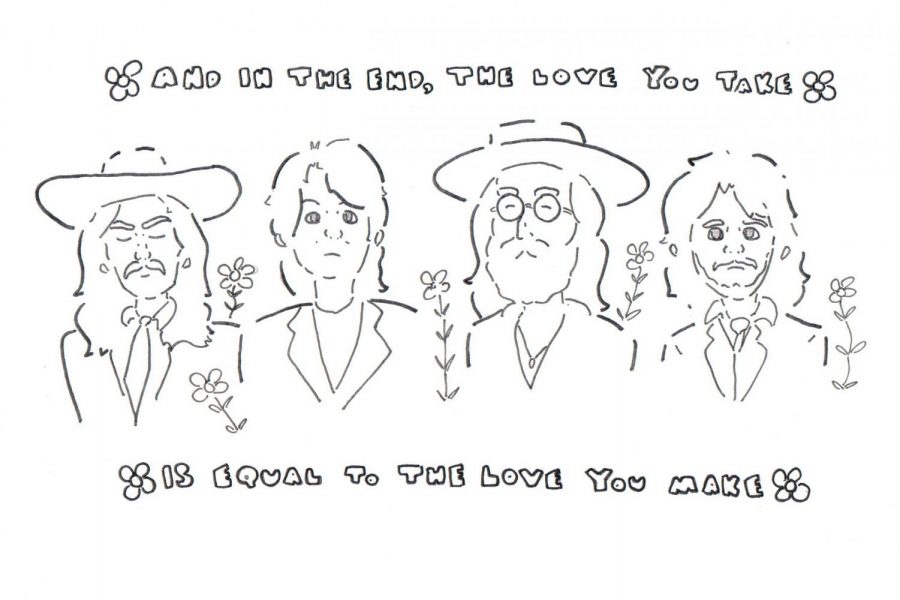 Fifty years ago today the Beatles released their swansong “Abbey Road,” sending ripples through the music community still felt today and forever shaping the history of pop culture as we know it.

Named after the studio where the band recorded nearly all of its songs, the album was the highest selling album in the United Kingdom in 1969, and the first Beatles album to sell over 10 million copies.

In 2019, the album sounds as fresh as it did on the day it was released. The trademark “Beatles Sound” is present throughout the album.

“In spite of all the things… the Beatles really could play music together when they weren’t uptight,” John Lennon said in a 1970 interview with Rolling Stone. “We’ve played together so long that it fits.”

The album cover is equally as timeless as the music itself.

On August 8, 1969 the Beatles crossed the zebra-striped crossing, forever immortalized, inspiring countless recreations in pop-culture. Each year thousands of fans flock to the intersection to pose like the Beatles did all those years ago.

Despite the success, the album’s history is a bittersweet tale of a group reaching its end.

In 1968, the Beatles were on the verge of a split. The exhausting recording process of “The Beatles” (widely known as the White Album) and “Let It Be” left the band at a crossroads. Both drummer Ringo Starr and lead guitarist George Harrison had subsequently left and rejoined the group at different points of recording the two albums.

Morale was at an all time low.

So it came as a surprise to longtime Beatles producer George Martin when he received a call from bassist Paul McCartney saying the band would like to do another album.

“Let It Be was such an unhappy record, even though there are some great songs on it, that I really believed that was the end of The Beatles,” Martin said in the 1995 docuseries “The Beatles Anthology.”

“I assumed that I would never work with them again,” he said.

Martin had been absent from the previous “Let It Be” recording sessions, with the group opting to record with contemporary producer Phil Spector instead.

Setting aside their differences, the band came together to begin work on what would be its final record.

“I think before the Abbey Road sessions, it was time to put down the boxing gloves … and really make a special album,” Paul McCartney said in an interview for “Anthology.”

The album came as a stark contrast to their previous project. “Let It Be” was envisioned to be a stripped back return to form. The band’s musical ability lent itself to the live nature of the album, but tensions strained the recording sessions.

“Abbey Road” was a different kind of venture all together. Ambitious orchestral scores and illustrious harmonies are present on over half of the tracks, creating a defining operatic sound.

Amongst the Lennon/McCartney penned classics of the album, blossoming songwriter Harrison holds the album’s, and perhaps the band’s most memorable moments.

The quiet Beatle earned his first number one hit with the ballad “Something,” written for his then-wife, actress Pattie Boyd. Harrison was a bit of a late bloomer when it came to songwriting, and was usually allotted a mere two songs per album. At last, his talent had grown to rival that of Lennon and McCartney.

Also on the album is Harrison’s iconic ode to hope “Here Comes the Sun.”

Written in the garden of close friend Eric Clapton, the song is a testament to Harrison’s songwriting that reflected the acrimonious spirit of the band at the time, and raised the idea that perhaps the Beatles’ split could lead to new opportunities.

“We didn’t know, or I didn’t know at the time ‘cause it was the last Beatles record that we would make but… it kind of felt a bit like we were reaching the end of the line,” Harrison recounted in a 1995 interview for “Anthology.”

Side two holds one of the band’s most memorable moments, a 16-minute medley of eight songs. Although the medley was thought up as a way to record songs not necessarily strong enough to stand on its own, the result is an innovative approach to recording that has influenced bands for years to come.

Each track bleeds into the next one, creating a nonstop momentum resulting in the climax “The End.” Fittingly, the song features trading solos from every member in the group, including a drum solo by Starr.

Bidding the listeners farewell with a final meaningful couplet.