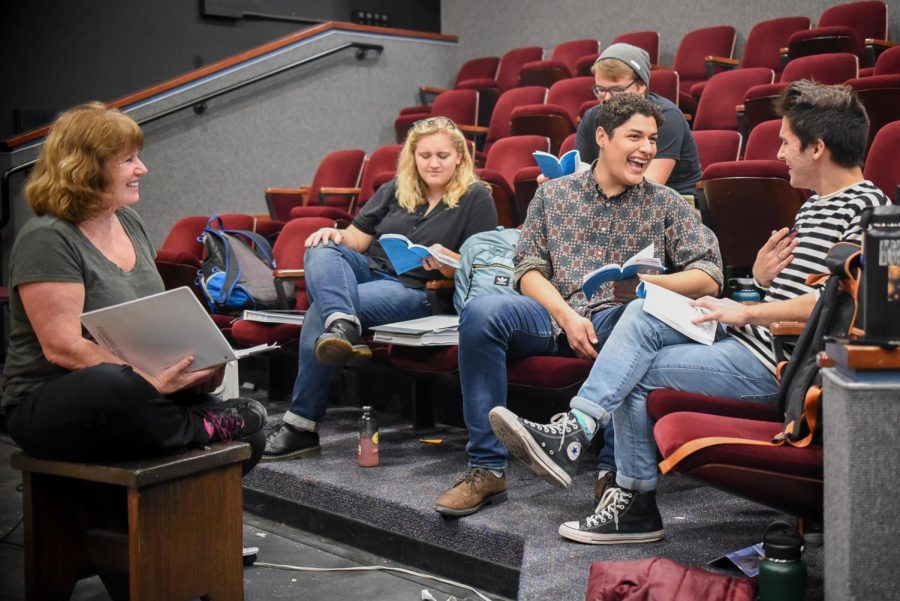 From left, Director Katie Laris and actors Aurora Gooch, Irving Soto and Christian Duarte, rehearse their lines for the play “Significant Other” on Friday, March 8, 2019, in the Jurkowitz Theatre at City College in Santa Barbara, Calif.

In this academic year, the City College Theatre Department has put on five shows and taught hundreds of young thespians the ins and outs of acting, stage managing, set designing and directing.

Gros directed last semester’s student production of “The Last Lifeboat” in the Jurkowitz Theatre. The play tells the story of J. Bruce Ismay, the owner of the infamous White Star Line and the company that built the RMS Titanic.

Rather than staying aboard as the ship sank, Ismay jumped into the last lifeboat, saving himself and leaving hundreds of others struggling to survive.

“The Last Lifeboat” followed 2018’s summer musical “Grease,” and the fall’s production of “The Game’s Afoot,” both of which took place in the Garvin Theatre and were directed by Professor Katie Laris.

“It’s been a great group of actors [in all shows],” Laris said.

Laris did a lot in the fall semester, directing two shows as well as teaching classes.

Both “Grease” and “The Game’s Afoot” were successful, the first being a peppy musical with an easily recognizable name and the other a comedic murder mystery.

Professor Patricia Frank, the department’s scenic and lighting director, said that while the department is usually able to replenish their production budget with the profits from ticket sales, “Grease” was a little different.

“The musical doesn’t ever pay for itself,” Frank said.

Still, the department was able to bring Sandy and Danny to life in the Garvin theatre, and were even able to bring a car on stage for “Greased Lightning.”

This spring semester, the department put on two more shows, “Harvey” directed by Gros, and “Significant Other” directed by Laris.

“Harvey” follows Elwood P. Dowd as he attempts to convince his friends and family of the existence of his best friend, a six-foot-tall white rabbit named Harvey.

The play was put on in Garvin and featured a rotating stage which, according to Frank, can be used again in future productions.

“Significant Other,” which was put on in the intimate Jurkowitz Theatre, follows Jordan as he watches his three best friends find love and hopes that he can find it as well.

Aurora Gooch, who played the character Laura, noted the short window of time the cast had to rehearse for the show.

“We really only had March to rehearse,” Gooch said.

Working within the limitations of the Jurkowitz Theatre, the cast and crew were able to take audiences to New York, Kentucky and the Carolinas. The theatre’s small stage makes it hard to hide set pieces and makes positioning actors on stage more difficult than in a traditional theatre.

“The Jurkowitz is also insanely hard to work in as an actor,” Gooch said.

“Significant Other” was a hit with most audience members, but Gooch said that at least two or three people leave during intermission every show because of their anger over the morals of the show.

Jordan Berman, the show’s lead, is gay and struggles with finding “Mr. Right.” He almost finds love with Will, one of his co-workers, but Will leaves the company just as he and Jordan start to get close. Jordan faces a similar scenario later on in the show.

“I didn’t know it was a big deal until [the first audience],” Gooch said.

“It’s not the kind of show we do a lot because it so deals in feeling and relationships,” Laris said.  “I hope that our younger generation doesn’t have those hatreds and fears about sexuality.” Overall, the show seemed to have a positive impact due to the audience’s ability to relate to Jordan.

The productions put on were all successful, but Gros had challenges in his theatre classes this semester, especially since spring break.

“There’s been a worrisome drop off in attendance,” he said.

Theatre classes, unlike a lecture course, require loads of participation because most of the projects and exercises are done in groups.

Gros said that these challenges seem bigger this semester than they have been in the past and that there needs to be more participation from students so that they don’t have to play catch-up.

“The teachers are stressed too,” he said.

In addition to teaching this semester, Gros is returning to the director’s chair for this summer’s production of “How to Succeed in Business Without Really Trying.”

This year has been a roaring success for the theatre department, with just a few cracks that need patching up.

Laris and Gros are set to direct more shows in the second half of this year, with Frank bringing their sets to life.

Gooch, who has played a big role in the department during her time at City College, is taking her talent to the Dell’Arte School of Physical Theatre in Northern California in the fall.

“Everyone in that department is completely competent and brilliant,” Gooch said.

“How to Succeed in Business Without Really Trying,” opens this summer in the Garvin Theatre, kicking off a whole new season of shows for the Theatre Group.