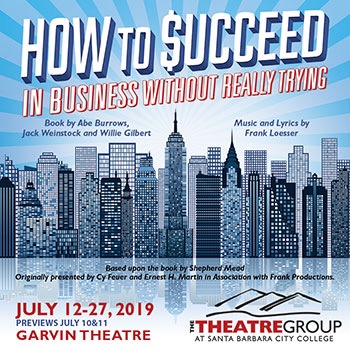 The hit Broadway musical “How to Succeed in Business Without Really Trying” is headed to the Garvin Theatre stage this summer.

The play follows J. Pierrepont Finch, a window washer who climbs his way to the top of the corporate ladder at the World Wide Wicket Corporation. He gets this idea after reading a handbook that shares the title of the musical.

Finch falls for Rosemary Pilkington, a secretary at the company, all while satirizing American big-business in the 1960s.

“How to Succeed” will be the Theatre Group’s first musical since last summer’s production of “Grease.”

“Grease” proved to be a success and the group hopes to continue that with “How to Succeed,” bringing big business and city life to the stage.

Scenic and Lighting Director Patricia Frank will be doing the sets for the show. The crew have had their first design meeting and will ramp up production on the sets as opening night approaches. Frank designed the sets for March’s production of “Harvey,” which rotated between a living room and the lobby of a mental hospital.

“How to Succeed” originally opened at the 46th Street Theatre on Broadway in October 1961 and closed three and a half years later in March 1965.

The musical has been revived twice on Broadway, once in 1995 with Matthew Broderick starring as Finch, and again in 2011, with Daniel Radcliffe, Darren Criss, and then Nick Jonas playing Finch during the revival’s year-long run.

Gros and the theatre department picked it for City College’s next musical because “the music is delightful,” and they wanted to do a show that was entertaining and had a little bit of social commentary.

“[The musical] creates the opportunity for the audience to go on a fun journey,” Gros said.

The musical highlights the relationship between Finch and Pilkington as both of them take action to improve themselves and better their situations.

Hannah Brudney, a City College student and drama major, has been cast as an ensemble member in the show.

“There’s a little bit about gender roles in the workplace and its kind of about falling in love with your work,” Brudney said.

Since coming to City College, Brudney has taken full advantage of everything the theatre department has to offer, taking dance and voice classes. She also worked with Gros on “The Last Lifeboat” in the fall.

“It has great musical numbers that are going to be really fun,” said Brudney of “How to Succeed.”

Tracy Kofford, the director of the SBCC Dance Company, will be choreographing the show.

The theatre department its productions as any other professional theatre group would. It casts its musicals months in advance to secure the commitments of the actors who do get cast, and give the actors who don’t get cast the opportunity to audition for other shows around town.

“It’s just the story of a funny guy who has to deal with these little obstacles like falling in love and following his dream,” Brudney said.

“How to Succeed in Business Without Really Trying” opens July 12 in the Garvin Theatre, and tickets go on sale June 17.