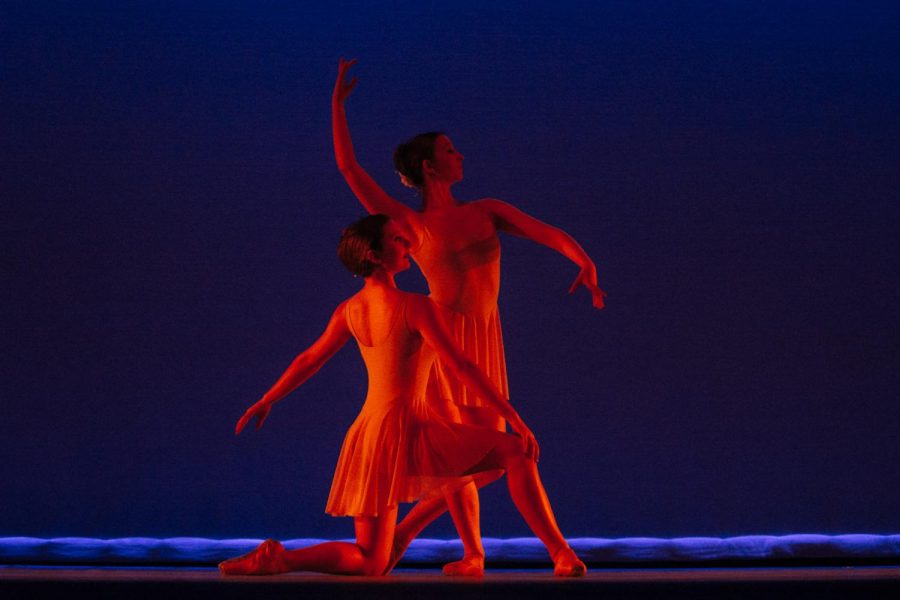 Dancers from the Santa Barbara Festival Ballet preform a piece called “For the Love of Henry” during the SBCC Dance Company’s Dance Collective on Friday, April 12, 2019, in the Garvin Theatre at City College in Santa Barbara, Calif.

The SBCC Dance Company wrapped up the spring semester with their 7th annual dance collective, 2019-20 auditions, and one last tour to come.

The company will rehearse for all of May in preparation for a final tour at a dance festival in Utah.

Dancer Mihrin Popatia is an international student from Canada and a senior member, meaning she’s been part of the company for multiple years. She will be parting ways with City College next fall to pursue dance and acting in Los Angeles.

She said that she’s learned a lot from the dance company, and will “carry it with her throughout her life.”

Popatia also mentioned that being a leader is a new thing entirely, and the other senior members of the company have had to learn that this year, saying “it’s the senior members responsibility to make the new members feel welcome, and to mentor them while sustaining a good relationship with your other members in the company.”

“You’re like a family, sometimes you fight and sometimes you don’t get along,” she said. “But at the end of the day we all love each other and have one goal-which is to perform and put our works on stage,” Popatia said.

Popatia said that attitudes in rehearsal and on tour “translates on to the stage, if you have respect and care for the other company members, the performance will be that much better.”

Director Tracy Kofford said that the dance company starts preparing their works as soon as the semester kicks off. They will have another set of final auditions on Aug. 27.

“I don’t think there is anything we could’ve done differently, I’m really proud,” Kofford said.

Company Member Amanda Ginella will be returning next semester, and is ready to continue working hard.

“It’s definitely going to change when some of our members leave, but I’m really proud of all of them,” she said. “It’s going to be different, but in a good way.”

Ginella said that she’s made a lot of progress this semester, and plans to commit more time next year, saying “we have to dedicate a lot of time to our tours and rehearsal. It really teaches me how to deal with time management.”

Both Ginella and Popatia have found that Kofford taking them on so many tours prepares them for the world of dance.

“I just hope they can take this experience with them, and remember the sense of accomplishment they had here at City College,” Kofford said.

Though the company has been a big time commitment, Popatia has found it worth it.

“One of the main things I learned is no matter how hard it gets, how tired you are, or how much energy you’re investing, at the end of the day it’s always worth it,” she said.