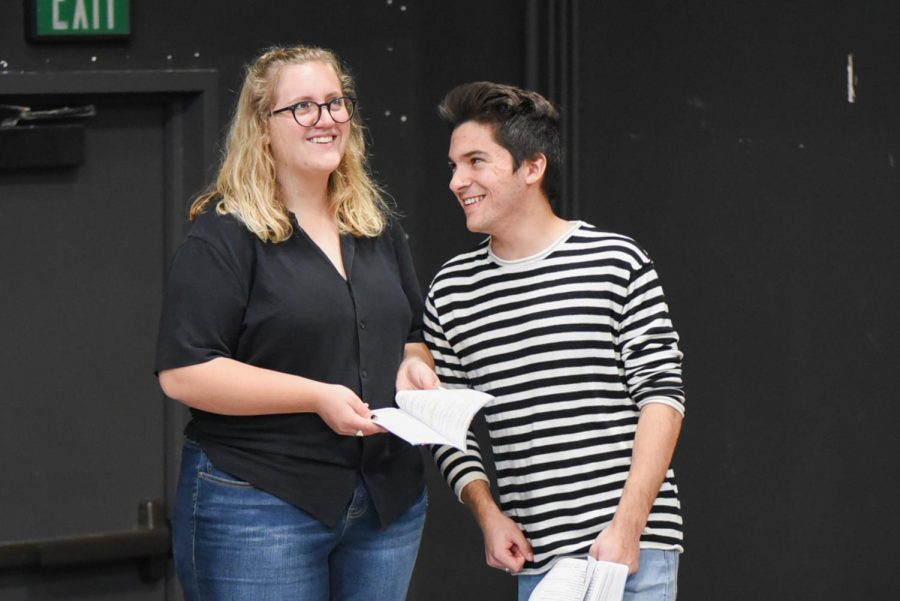 From left, co-stars Aurora Gooch and Christian Duarte rehearse for the play “Significant Other” on Friday, March 8, in the Jurkowitz Theatre at City College in Santa Barbara, Calif.

A broken wrist is the best thing that ever happened to then sixth-grader Christian Duarte.

Now playing the lead role of City College’s new play “Significant Other,” Duarte said his childhood injury is the blessing in disguise that prevented him from playing basketball and led to his passion for dance and theater instead.

“I needed something that I could go to, that would always be a constant, and that ended up being theater,” he said.

Duarte was born in Las Vegas, Nevada and later moved to San Diego for middle and high school. Since then, he has been attending City College as a theater arts major for transfer.

His lead role in “Significant Other” as Jordan is the biggest he’s ever had. He is on stage for all but 30 seconds of the show.

“It’s definitely like a marathon, however in the moment it just feels real,” he said about the large amount of lines his role requires.

After watching him perform in “Grease the Musical,” Director Katie Laris said she knew Duarte was perfect to play Jordan in “Significant Other” and immediately encouraged him to audition.

She described Duarte as focused, effective at thinking on his feet, charismatic, a hard worker, inspirational and a “triple threat.”

“I believe he will be a star of the theater,” she said.

Laris is not the only one who has pushed Duarte to be the best actor he can be.

He said his eighth-grade drama teacher and best friend knew when he was young that theater was his destiny. They encouraged him to apply to Coronado School of the Arts, a San Diego high school specifically geared towards students interested in music, theater and other fine arts.

“Theater has been my life ever since,” he said about his high school experience.

As a high schooler, Duarte and his three younger siblings were taken from their parent’s custody due to a falling out. As a result, the four of them moved in with their aunt and three cousins, who became more like siblings. He relied heavily on his aunt’s support and love for acting to get him through rough times.

“I am eternally grateful to her for everything she has given to me and my family,” he said.

His aunt and now six siblings attended all of his high school performances. He said he felt proud to have them watching when he played Bat Boy in “Bat Boy: The Musical”

“It was kinda fun to have a possy that big honestly,” he said.

He said he has continued to carry his pride for his family with him the past few weeks while he’s been playing Jordan on stage. After memorizing his lines, Duarte said he prepared for the role by taking the time to understand Jordan’s decisions.

“I feel a really strong connection to this character now,” Duarte said. “I am so excited that I get to share it with the Santa Barbara audience.”

The play is about a gay man coping with his friends getting married. He said the show will appeal to a younger audience because of its relatability, humor, and slight vulgarity.

He described it as “very contemporary, very gay, and very loud.”

The show will continue to run April 27 in the Jurkowitz Theatre. Tickets can be purchased here.

“I am always just excited for people to be able to have as much fun watching as I do performing,” Duarte said.