SBCC Jazz ensembles strong in final performance of the year 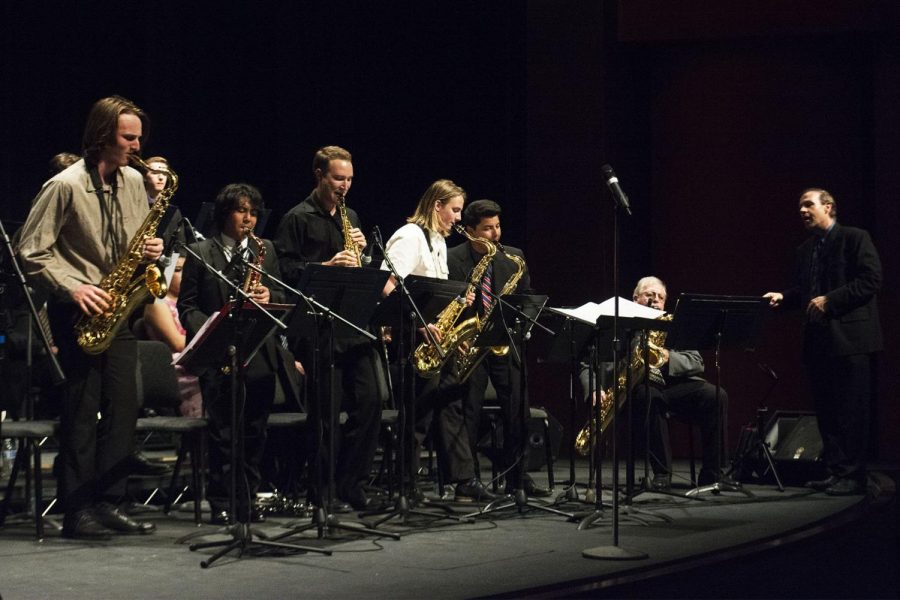 Members of SBCC’s Good Times Big Band play jazz music as the first act in the Big Band Blowout Concert at 7:00pm on Monday, April 22, 2019 in the Garvin Theatre on West Campus at City College in Santa Barbara, Calif.

With one final evening of music, City College’s Big Band Blowout brought a grand finale to the semester.

The evening was kicked off by the Good Times Big Band, followed by the Lunch Break Big Band and was closed out by the Monday Madness Big Band.

The concert was held at 7 p.m. Monday, April 22 City College’s Garvin Theatre. Three of the college’s bands were featured.

Eric Heidner, director of Good Times, stepped on stage and introduced the band as the house lights dimmed.

At first, it seemed the band was having trouble finding their footing, possibly due to the size of the venue. However, the band quickly warmed up and they were off.

A highlight of Good Times’ five-song set was “Alice’s Restaurant,” a tune arranged by student Kellen Romano, one of the band’s guitarists. The band found their stride in this song, and a tight rhythm section allowed a dazzling guitar solo by Brandon Kinalele to wow the crowd.

The ensemble’s set was closed out by “Blues for Uncommon Kids,” as a tribute to late Monday Madness director Isaac “Ike” Jenkins.

“The Good Times Band didn’t get to say goodbye,” said Heidner. “This one goes out to you, Ike Jenkins.”

The bluesy number was held together by drummer Aeron Price, whose incredibly complex fills seemed second nature as he drove the band forward. Another ripper of a solo was brought forth by Kinalele, who demonstrated both virtuosity jazz licks and gritty blues riffs.

Up next was the Lunch Break Big Band, who played a tight three-song set.

“It’s not the number of tunes you have, it’s how you use them,” joked director Jim Mooy.

The band opened with the trombone-heavy “Blue Daniel.” Trombonist Grey Ingersoll played a fantastic lead throughout.

Lunch Break followed up with Jon Daversa’s “Internal,” a piece with the unusual 7/4 time signature.

The song featured Sergio Rodriguez on lead trumpet, whose soaring high notes flew above the rest of the band.

“Internal” was Lunch Break’s best song. It played to the band’s strengths in dynamics, starting off as a delicate dreamscape and building into a full-on rocker. As the song picked up in energy, director Mooy hopped around on stage to signal the band it was time to go off.

Go off they did. As Price’s drums exploded, the rest of the band followed suit and quickly fell into a deep groove that got audience members’ feet tapping.

The band was on fire.

By the end of the number, Mooy was grinning ear to ear.

The band ended their set with Thad Jones’ “Mornin’ Reverend.” The song showcased Matt Krepky, who let loose a killer saxophone solo. Behind him, the band was right on the mark. Toeing the line, the band was just loose enough to keep things interesting and just tight enough to remind us they knew what they were doing.

Following a brief intermission, the evening was brought to a close with the Monday Madness Big Band.

One of the highlights of their set was Herbie Hancock’s “Dolphin Dance.” The song was brought to life with the help of pianist George Friedenthal, whose fingers gave way to brilliant piano fills sprinkled throughout.

After blazing through a couple of songs, Monday Madness’ coup de grace was unleashed, the explosive “Groovin’ Hard.”

Director Andrew Martinez explained it was one of the band’s favorite songs to play, and it showed.

The interplay between the brass section shined. They knew when to give each other space, and when to come together to create a massive sound that reverberated through the entire space.

Tenor saxophonist Justin Claveria played my favorite solo of the evening. The searing melodious lead demonstrated the virtuosity of the musician, as well as his ability to translate emotion into notes.

The evening ended on a high note, and the Big Band Blowout was a huge success. Every ensemble was able to demonstrate the hard work they had been putting in the entire semester, and it certainly paid off.