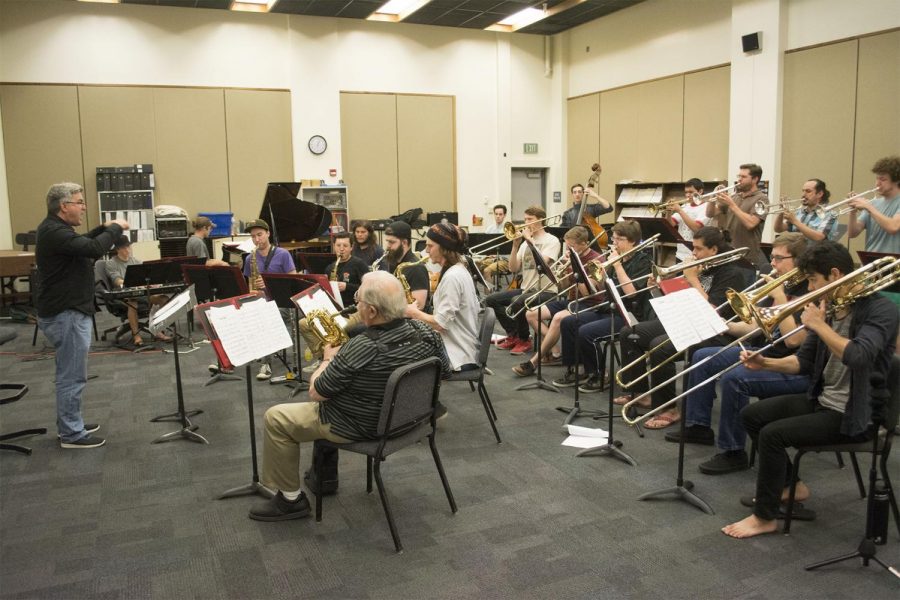 Students of SBCC’s Jazz Ensemble practice for their Big Band Blowout Concert happening Monday, April 22, 2019, in the Garvin Theater, on Thursday, April 18, 2019, in the Drama and Music Building Room 105 at City College in Santa Barbara, Calif.

Santa Barbara City College’s jazz ensembles promise to end the school year with a booming crescendo at the annual Big Band Blowout, an all encompassing jazz concert that showcases the musicians’ hard work over the semester.

“It’s really an event for people to see what we’ve come up with the whole semester,” said Eric Heidner, director of Good Times and trombonist in the Monday Madness. “They’ll see styles that they wouldn’t necessarily associate with jazz.”

Each band will be playing four to five of its favorite jazz songs. The Good Times Big Band will be doing a rendition of “Blues for Uncommon Kids” as a nod to Monday Madness’ late director Isaac “Ike” Jenkins, who loved to play the song.

“People don’t realize what great level of playing we have at this school,” Heinder said. “We’re putting out some pretty tough stuff. We’re better than the combos at the universities.”

The Big Band Blowout will be the public’s last chance to catch outgoing musicians whose time at City College is coming to a close.

“We’ve had a lot of growth over the semester,”  said Andrew Martinez, director of Monday Madness. “I can’t believe it’s already the end.”

Monday Madness will be playing the jazz classic “My Man Bill” for Jenkins.

Because of the concert’s nature, a widespread diversity of jazz styles will be showcased. Heidner said the audience can expect jazz ranging from “bebop to ballads to waltzes to Latin.”

The concert also acts as an opportunity for the bands and their directors to learn from one another.

“I have no idea what the other groups are doing,” Heidner said. “It’s a chance for the bands to say ‘here’s what we can do.’”

The concert will be held at City College’s Garvin Theatre, which will offer a unique experience for musicians and concert goers alike.

Ensembles are used to playing smaller venues like SOhO, so a larger venue like the Garvin Theatre will have a massive effect on sound.

The bands will have to play louder and harder than they are used to, resulting in a different kind of performance.

“It’s different, the room sort of sucks the sound,” Martinez said. “The band has to get used to it, it’s part of the business. I’m excited to see the energy!”

Admission for the event costs $15 for the general public and $10 for students.

“Be prepared for many styles, great soloists, that tight ensemble sound and expect the unexpected,” Heidner said.