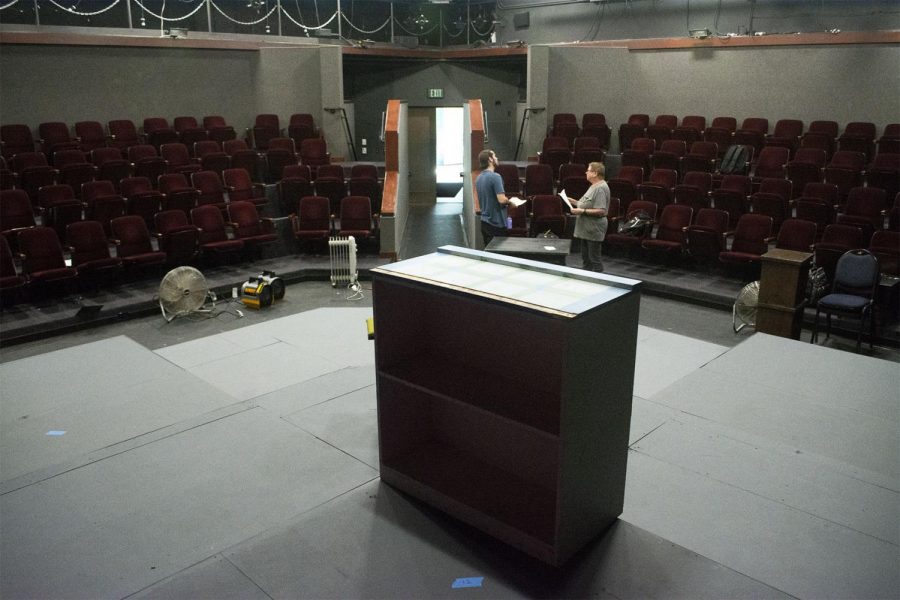 The Jurkowitz Theatre on west campus at City College in Santa Barbara, Calif. The Jurkowitz is significantly smaller and far more intimate than the much larger Garvin Theatre and is used for less professional, student productions.

As opening night looms for City College’s latest play, “Significant Other,” actors and audience members are lining up to flood the

Theatre, one of the campuses most unique rooms.

The Drama and Music building stands as a landmark on City College’s West Campus and includes both the Garvin and Jurkowitz Theatres.

While the Garvin hosts City College’s large-scale performances, the Jurkowitz, a black box theatre, is home to many student showcases and classes. The Garvin can seat 264 more theatergoers than the Jurkowitz’s 106.

“Each theatre is important because it provides different opportunities,” said Patricia Frank, director of design and technology for the theater department.

Katie Laris, theater professor and “Significant Other” director, said the Garvin is like “a big canvas that you’re painting.”

Due to the larger scale, if there’s a paint stroke out of place, the Garvin audience likely wouldn’t notice. The smaller scale of the Jurkowitz’s makes imperfections impossible.

The Garvin was built in 1977 and remodeled in 2012, with plenty of bells and whistles. Directors can “fly-in” set pieces, taking advantage of the theatre’s proscenium arch. This gives the illusion that sets are flying onto the stage when really they are suspended high up where the audience can’t see them.

“The Garvin is really what we’re going to be working with professionally,” Theatre Student Mimi Vorosmarthy said.

The arch also lets set designers mechanically rotate set pieces downstage, much like in this spring’s production of “Harvey.”

Plays, lectures, dance performances, and jazz shows usually happen in the Garvin Theatre, but the nearby Jurkowitz will host this spring’s performance of “Significant Other,” which ran for two months on Broadway in 2017.

“The shape of the Jurkowitz is tricky,” Laris said.

The Jurkowitz Theatre is known for its intimacy and ability to bring viewers into the show.

“You get the adrenaline of being up on stage but you are still close enough to your teachers where you can get quality critique and feedback,” Vorosmarthy said.

The Garvin Theatre has the capability to hold massive set pieces, but directors in the Jurkowitz have to watch out for a key problem. If an actor is standing in a specific area of the stage, the audience may only see their back, or risk having their view blocked by a set piece.

While Garvin has wings and depth where actors can hide, Jurkowitz puts everything, and everyone, out in the open.

“It’s hard to hide somebody in the darkness,” Laris said.

“Significant Other” plans to show off urban New York, among other locations, with the space that they have. Laris noted that Jurkowitz is perfect for “Significant Other,” as it is an individual story that focuses on one main character.

The department has thought about making Jurkowitz more functional, but ultimately haven’t because of the large number of season ticket holders. The 100 seats currently in Jurkowitz are sufficient for those who repeatedly attend the Theatre Group’s performances.

For now, both theatres meet, and occasionally exceed, the needs of the directors and thespians who transform them.

“Significant Other” opens April 12 in Jurkowitz and “How to Succeed in Business Without Really Trying” opens this summer in the Garvin Theatre.