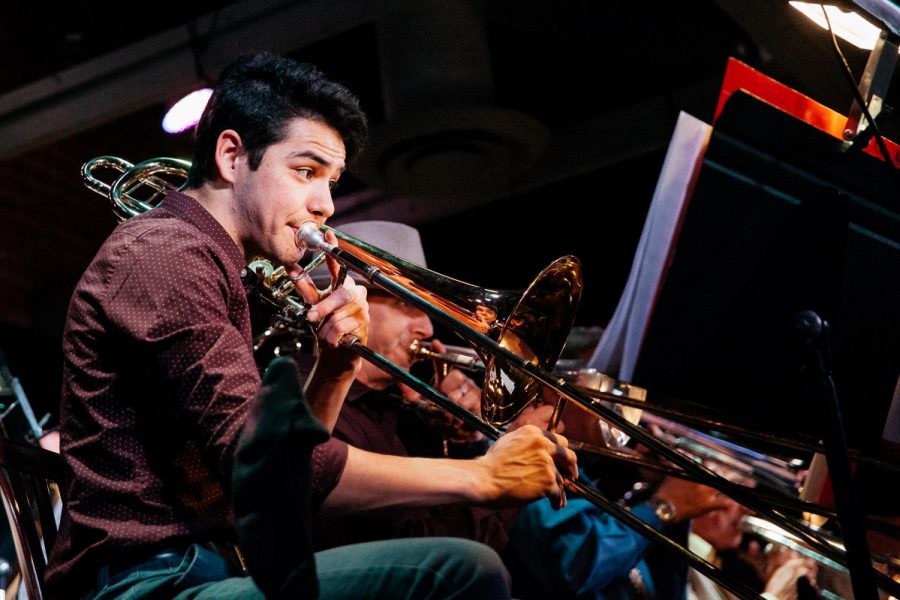 Douglas Swayne plays the trombone during The Ike Jenkins Legacy Concert by the SBCC Monday Madness Jazz Band on Monday, April 1, 2019, at the Soho Restaurant and Music Bar in Santa Barbara Calif. “We are playing really loud tonight, I hope it sounds good to the audience, my ears are definitely ringing.” Swayne said during a performance intermission.

Jenkins, who had been the band’s director for 15 years, passed away in December of 2018. Monday night his memory was honored, as new Monday Madness director Andrew Martinez led the band through 11 of Jenkins’s favorite jazz tunes.

The hole-in-the-wall music club was packed to the brim with people as the band tuned up. As the horns and brass sections raised their instruments, the house lights went dim and then dark.

The head-turning “Groovin’ Hard” by Don Mendoza introduced the crowd to the band’s talent. The song’s energy was supported by the band’s dazzling saxophone section, featuring a solo by saxophonist Justin Claveria.

The band followed up with the melancholy “Katie” by Sammy Nestico. “Katie” allowed the band to show off its dynamics, highlighting the softer notes of the band. Pianist George Friedenthal’s fingers gently danced across the keys and created a beautiful somber tone that brought the piece home.

These dynamics were pulled off with help from the band’s killer rhythm section. Throughout the night, bassist Randy Tico and drummer Kevin Winard kept it tight. The reliable rhythm allowed space for other musicians to take more risks with their playing, resulting in some spectacular solos.

This was extremely apparent in the band’s rendition of “One More Time, Chuck Corea” by Gene Puerling. As soon as Martinez counted them in, the band was off and running. Winard’s drumming could be likened to a freight train, constantly pushing the band forward.

One of the evening’s showpieces was “T.O.” by Rob McConnell. The complexity of the song seemed to come second nature to the band, who were completely unphased by the various rhythm and tempo changes. Trombonist Eric Heidner played a stunning solo on a trombone gifted to him by Jenkins.

The band’s other strength was the brass section’s ability to play with one another. Comprised of a saxophone, trombone and trumpet section, the players knew when to give each other space and when to play together to create a strong sound.

In Miles Davis’s “Milestones,” the brass came in like a cascading waterfall, with each section building on the notes of the last one. The song also featured a solo from Friedenthal and Winard. “Milestones” was brought to life by the interplay of these two musicians in particular.

Another highlight of the evening was Josef Myrow’s “You Make Me Feel So Young,” sung by Winard. Although lost in the mix at times, his crooner vocals created a heartfelt moment that took the crowd by surprise. When introducing the song, Winard explained how he was using the same hi-hat cymbals that he had purchased from Jenkins in middle school.

The concert ended with “Time After Time” by Jule Styne and Sammy Cahn. Each section had a place to shine, demonstrating the diversity of the band’s sound once again. With Winard firing off sharp pistol-like fills and Tico playing a bass marathon, the band played seamlessly.

Audience members were on their feet by the end of the night and some of them were dancing. The mood was one of celebration and community. The concert successfully honored the life of Jenkins, whose memory continues to live on through the lives he touched and the music he played.