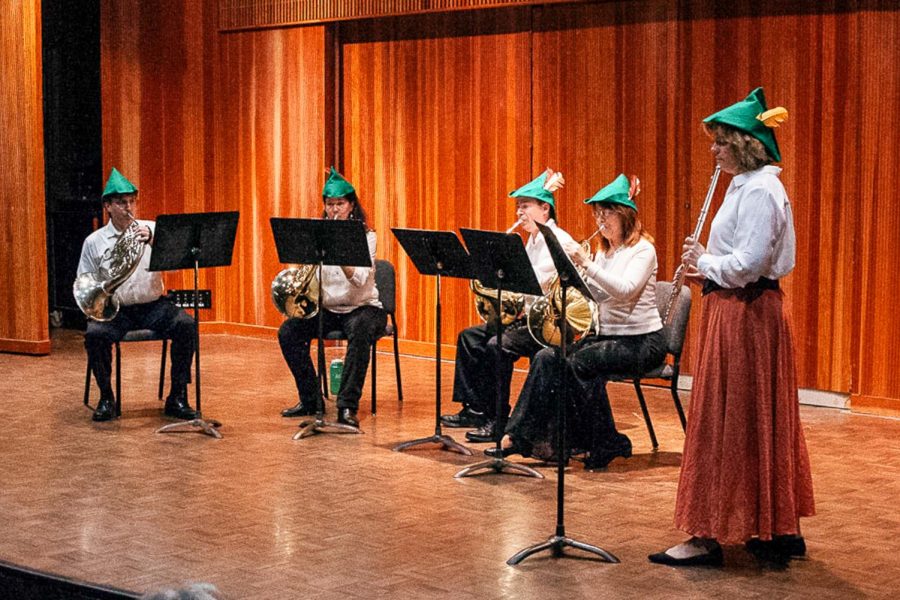 An ensemble of four french hornists and one flutist preform for the Chamber Winds performance on Sunday, March 10, 2019, in the Fe Bland Forum at City College in Santa Barbara, Calif.

In total seven ensembles captivated the audience, with concertgoers ranging anywhere from young kids to college students to senior citizens.

The mood was light and full of excitement as The 8th Position Trombone Octet took the stage, met with applause by the audience.

As the first act of the night, the group had a lot riding on their shoulders. The ensemble performed a triumphant rendition of “Overture to ‘Egmont’” by Ludwig van Beethoven, a piece that incidentally does not feature trombone in the original composition.

The captivated audience nodded their head to the rhythm and exploded in applause when the group finished.

After the intermission the SBCC Trumpet Ensemble took the stage. Made up of 13 trumpeters, a conductor, and featured a crass menagerie of trumpets, the excess amount of musicians allowed the players to perform parts normally performed by other instruments.

The group’s rendition of the classic gospel piece “Goin’ Home,” by Antonin Dvorak, was another highlight of the evening. The somber yet hopeful piece was crafted by the musicians’ ability to maintain delicacy while playing the song with great emotion. The group also played an invigorating renditions of Earth Wind and Fire’s “In the Stone”  and Joe Zawinul’s “Birdland” that got audience members’ feet tapping and hands clapping.

With soothing songs like Mack Johnson’s “Fly Me to the Moon,” and Erroll Garner’s “Misty,” the group shined in displaying the true virtuosity of the instrument.

Following the octet was the SBCC Flute Sextet. The group performed “Chivy” by Nicole Chamberlain.

The avant-garde piece pushed the flute to limits I hadn’t seen before. Techniques like beatboxing and singing while playing, swift blows of air akin, and the sound of arrows whizzing helped create a mysterious mood that the piece carried.

After the sextet came the SBCC Horn Quartet featuring the french horn. The group performed three tunes, notably “Bird of the Forest” by Franz Doppler, where the musicians, donning Robin Hood esque hats, were joined by flautist Sherylle Mills Englander for a ripper of a solo.

The ensemble did a fantastic job showcasing the instruments’ rich low tones.

Next up was the West City Brass Quintet, an ensemble made up of City College and Westmont professors.

The quintet performed two songs, a three movement piece “Quintet” by Victor Ewald, and “Scherzo” by John Cheetham. Both songs showcased the group’s ability to play with one another, pulling off perfect harmonies without error.

The evening was closed out by the 19 piece SBCC Trombone Choir. The ensemble served true to the name, and perfectly embodied the spirit of a community college. It didn’t matter who the individual musician was, every part came together in harmony to build off one another.

The group did a perfect job of balancing the softer, melancholy breaks of Eric Ewazen’s “Enconium” with its louder, more cacophonous parts.

All in all, the City College Chamber Winds Concert was a triumph for the music department. It helped showcase the smaller ensembles the college has to offer, and put together a soothing evening of fantastic chamber music.