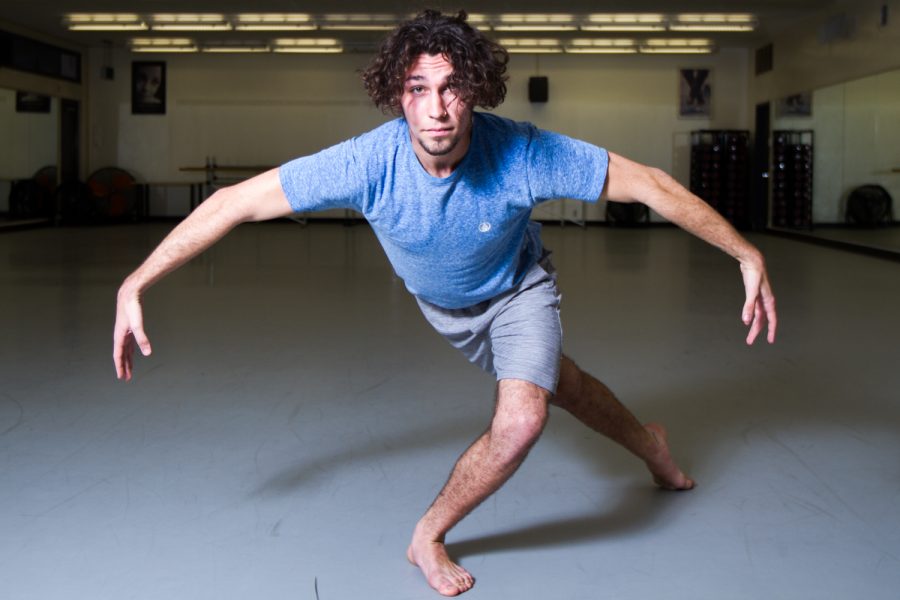 Dallin McComb, a dancer from City College’s Dance Company, practices inside the Sports Pavilion on Tuesday, March 5, 2019, at City College in Santa Barbara, Calif. McComb has been dancing for three years and after Tracy Kofford, artist director of SBCC Dance Company, asked him to choreograph a dance, he knew that’s what he wanted to focus on.

Since discovering his passion for dance three years ago, City College student Dallin McComb has given the art his undivided attention.

A local kid, McComb started dancing with Assistant Dance Professor Tracy Kofford in 2016. He then joined SBCC’s Dance Company, where he spends his time practicing modern and contemporary dance styles.

Although McComb is a newer dancer compared to some of his peers, they still say that he has demonstrated incredible growth.

“He’s definitely taken a huge leadership role in the company this year,” Amanda Ginella, a student in the Dance Company, said. “He totally stepped up, he’s the person you go to for advice.”

Fellow dancer Lennon Chahivec-Schnieder said the first thing he noticed about McComb was his smile, and commented on his personable nature.

“I call him the glue of the company. I’d say he’s one of the main reasons people absolutely love it,” he said.

McComb described his first two years of dance as the most nerve-racking, noting that “everybody on stage had at least eight years on me.” With time and hard work, he said the nerves were replaced with the feeling of home on the dance floor.

“Going out there and doing it, I honestly became addicted to it,” he said.

One of the best opportunities dance brought McComb was traveling across various locations in the United States.

“We’ve gone to LA many times, San Diego, Monterey annually for the last three years, St. George, Utah. Palm Springs, and a ton of other places… A lot of colleges and universities have a student company, but not the kind that performs at a professional level to the extent that we do,” he said.

The expenses of the company’s tours can be a lot to handle. The Dance Company receives around $1000 from the college every year, so most of the money has to come out of Kofford’s pocket. The money received “doesn’t even cover the expenses of one tour.”

“It’s honestly been disappointing to see such a deserving program have little to no support from the school,” McComb said. “Tracy’s made a life-changing program here that I’m so immensely grateful for.”

McComb choreographed and will perform a student piece for the American College Dance Association March 28-31 at the University of California, Irvine.

As for his future plans, McComb is seeking out a bachelor’s degree in modern dance and a minor in psychology, and plans to get a masters in dance and movement therapy. These degrees will allow him to practice as a licensed dancer.

“That’s the goal, we’ll see,” he said with a small, hopeful chuckle.