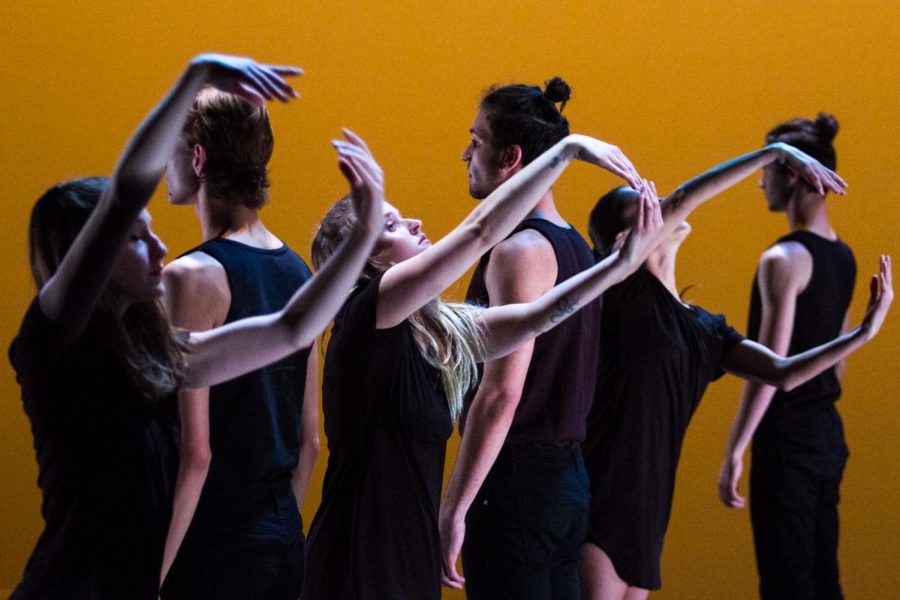 Members of the Santa Barbara City College Dance Company perform “Prologue; A Sense Of Human”, choreographed by Shelby Lynn Joyce, on Friday, March 1, 2019, during the HH11 Dance Festival at the Center Stage Theater in Santa Barbara, Calif. Artist Director Tracy R. Kofford and Joyce selected the costumes for the dancers.

The Nebula Dance Lab kicked off their fifth-annual HH11 dance festival this weekend at the Center Stage Theater with performances from SBCC’s Dance Company and other groups from across North America.

During a brief introduction from the directors, the audience was told that the 55-minute show should be “watched as a movie.” That sentiment was brilliant and seemed to set the mood for everyone in the room.

The lights dimmed and bright fluorescent colors appeared on the screen behind the small-scale stage.

SBCC’s Dance Company contributed to the festival and gave the audience a stunning performance. The group of 14 took the stage, scattering over the dance floor wearing all black. The way each dancer was incorporated in the choreography was fascinating. Everybody showed their artistic abilities, connecting their mind and body with their fluid movements.

Each performance was different, and that was probably what I enjoyed the most. While they were all spectacular, there were a few in particular that took my breath away.

A group of four dancers came out and began moving in unison. The performance was set to the sounds of a train station crowded with people, an interesting choice for background music.

The show then shifted to Slow Meadow’s song “Ghosts in the Brazos.” Each dancer took turns with solos. While they awaited their turns, they sat down and watched their fellow dancers pour their heart out in their movements.

I fought back tears during this performance. The choreography repeated throughout the routine. It felt as if the dance was portraying what it felt like to feel stuck, lost, and running in circles. I was mesmerized by the dancers’ every move.

The crowd applauded as a new group took the stage.

Another favorite of mine was a duet between two young men dancing to popular rock artist, Lynyrd Skynyrd. This was one of the only performances which featured music with lyrics. The song repeated inspirational sentences like “follow your heart.” This song made me feel like the dancers were really able to connect with the audience.

The show felt very contemporary, and combined elements of several dance genres, including modern, jazz, lyrical, and classical ballet, to name a few. It was clear that every dancer, director, and artist put in the hard work to make sure it was an evening the audience will never forget.

The HH11 festival is taking place until March 3 at the Center Stage Theater.