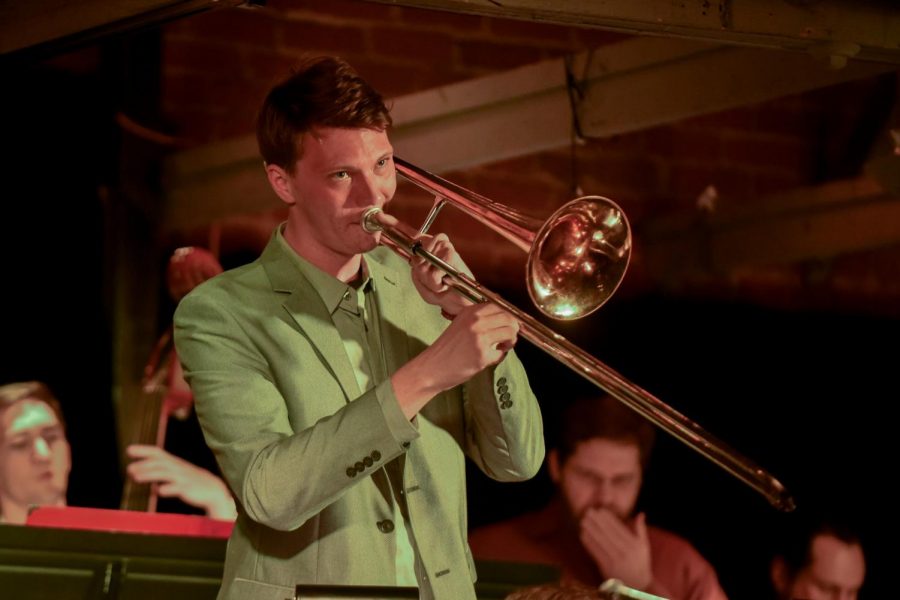 Greg Ingersoll plays the trombone during Lunchbreak Big Bands performance on Monday Feb. 11, 2019, at the Soho Restaurant and Music Bar in Santa Barbara, Calif. The City College band will be playing again at Soho on March 18, at 7 p.m.

The audience was already pumped by two of City College’s other jazz combos by the time Lunch Break took the stage.

It was a full house in SOhO and the mood was brimming with excitement. As the band tuned up, laughter, clinks of glasses and silverware and cheerful conversation filled the room. The overhead lights cast a moody yellow glow on the musicians.

Around 8:15 p.m., Band Director Jim Mooy began making introductions. The band opened with a rendition of Buddy Rich’s “Waltz of the Mushroom Hunters,” a longer and incredibly complex piece of music.

As soon as Mooy counted them in, the band released a massive sound that got everyone in the room’s attention. The song had a sense of urgency and forward momentum throughout that kept the audience engaged. This can be attributed to the band’s rhythm section, which held down the tempo impeccably.

After the band closed out the eight minute journey “Waltz,” it was on to “Northern Lights,” an original composition written by trumpeter Scott Lillard. Mooy told the audience it was his favorite piece to do with the band— and it showed.

In the middle of the song, the band settled down and Lillard played a trumpet solo. All eyes were on the trumpeter as a mysterious and delicate aura was created, with the help of vibraphonist James Grotenhuis. As the solo came to a close, the audience erupted into applause and the band began to build.

The rising crescendo was held together by Price, creating a wobble that could fall apart at any moment. But it didn’t of course, and a cacophony of brass showcasing the interplay ability of the band ensued.

Lunch Break then played a Maynard Ferguson inspired version of “MacArthur Park,” originally written by Jimmy Webb, which was my personal favorite of the evening. Featuring James Watson on lead trumpet, the band soared.

Extreme tempo and beat changes that occured without a hitch can be attributed yet again to the tightness of the band’s rhythm section, and the band’s director. While the musicians noticeably focused up during this song, the mood was light. Every time a challenging transition was pulled off, smiles and nods were exchanged, showing the solidarity of the band as a whole. When the band finished off the song, there seemed understanding between the musicians that they were giving the audience their money’s worth.

“Morning Reverend,” a fast and urgent tune written by Thad Jones followed, featuring the band’s saxophone section. The song had a noticeably lighter feel, and one could tell that the musicians were having a great time.

The evening was closed out by Frank Foster’s “Who, Me?,” yet another piece that landed perfectly due to the band’s mastery of dynamics. The song created an atmosphere that harkened back to the golden years of Broadway. At one point, director Mooy stood off to the side, looking at Lunch Break like a proud father. Nearly every instrument got a chance to solo in this song, and the crowd loved every minute of it.

A high point of the song was the four way saxophone solo battle, with all four saxophonists standing up and taking turns playing their hearts out, with Mooy encouraging them all the way. Eventually, the band ended the song with a loud brass explosion, and the set came to a close.

The Lunch Break Big Band perfectly embodies the spirit of jazz. With unplanned solos, fun stage banter and overall spontaneity of the musicians, the band is in top playing shape and is sure to not disappoint.