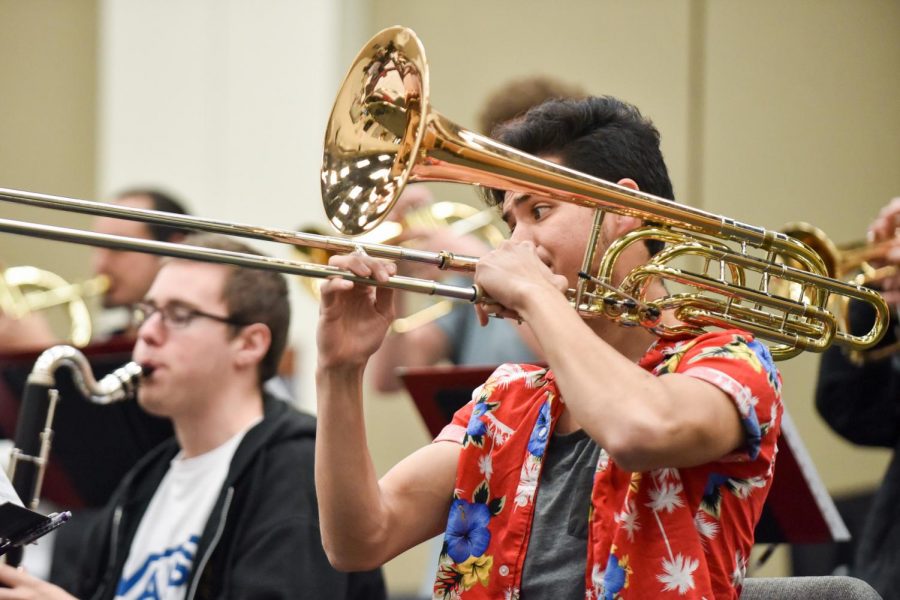 Douglas Swayne plays the bass trombone during the Lunchbreak Big Bands practice on Thursday Feb. 7 at City College in Santa Barbara, Calif. This was the bands last practice before their upcoming show at 7 p.m. Monday, Feb. 11 at the SoHo Restaurant and Music Club.

“It’s the best big band I’ve played with. The sound quality is phenomenal,” said trombonist Douglas Swayne. “There have been a lot of fun moments.”

The term “Lunch Break” comes from back in the day when professional musicians would come down to the college’s campus during their lunch break to engage with the students. This tradition is still somewhat around today as some community members act as mentors to students to facilitate a hands-on experience.

“We get to play with the best musicians here,” said pianist and vibraphonist James Grotenhuis.

Many professional jazz musicians have cut their teeth playing in the band, including Jim Mooy, the band’s director.

Having made improvements in the quality of their sound, memorizing their parts, and overall discipline, Mooy said he’s ecstatic about the band’s playing shape.

“It’s just one of those years,” he remarked. “Rehearsals are going great.”

This semester, Lunch Break is right on tempo. The band rehearses twice a week for about an hour and twenty minutes at a time, so the musicians know to be disciplined.

The Lunch Break Big Band has a high turnover rate, which helps keep the music fresh every semester, as musicians come and go. To allow the opportunity to run material that might not have been appropriate with past lineups, Mooy picks the songs to perform based off the band’s strengths and weaknesses. Since the band has a strong trombone section this year, songs that showcase that particular section are more likely to be selected for the lineup.

For the first time in six years, the band will be playing “Northern Lights,” a song written by Lunch Break veteran and trumpeter Scott Lillard.

The band has a busy semester ahead of them as they begin with a couple shows at SOhO, Downtown Santa Barbara, followed by a performance at the “Big Band Blowout” at City College’s Garvin Theatre. They will also back acclaimed trumpeter Wayne Bergeron at the Dos Pueblos Jazz Festival as the headlining act.

The band will be returning to the Monterey Next Generation Jazz Festival in April and will play alongside some of the world’s top college-level jazz ensembles.

The band has affected many students lives and continues to be a place of learning and collaboration where top musicians can showcase their talents to students and the community alike.

“The Lunch Break Band has had so many different incarnations with different strengths and different struggles—but it is always representative of a group of exceptional human beings whose dedication to personal excellence is matched only by their love of music and devotion to one another,” said Lillard.

The Lunch Break Big Band will be performing 7 p.m. Monday, Feb. 11 at SOhO.