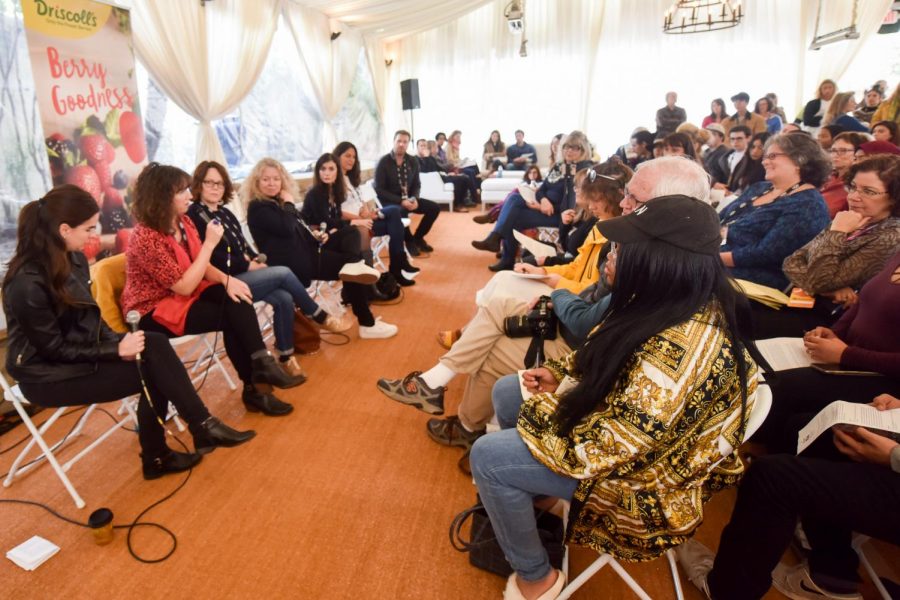 City College students in the course “Film Studies 108A” and audience members listen to Lis Bartlett, in red, share her experience as a film director at the 34th Santa Barbara International Film Festival on Friday, Feb. 1 behind the Lobero Theater in Santa Barbara.

The start of the Santa Barbara Film Festival this week also meant the start of City College’s Film Studies 108A class— its students were at the front of every line, ready to explore modern filmmaking.

Film Studies 108A is a three-unit course that only lasts 10 days. During its duration, students research films and filmmakers, keep a film log and write reviews for the department’s website. Participants also attend workshops and movies at the film festival, which take place all over downtown Santa Barbara.

Hollyn Heron, a former film festival studies student, said she enjoyed her experience in the class but noted that the course was extremely time-consuming.

The class, though often demanding, opened up Heron to genres of films she wouldn’t have otherwise learned about.

“There’s a lot of movies that I went and saw that I don’t think I would have seen,” Heron said. “They turned out to be really great movies.” She said it was the festival and the course that helped her realize her love for Icelandic films.

In the field, students are required to see around 20 films and attend panels.

As busy as the students’ days are during SBIFF, the opportunities accompanying this course are endless.

“You have an opportunity to network with filmmakers, producers, and executives,” said Michael Stinson, film studies professor.

The course also teaches the importance of festivals in movie production.

“These days there are film festivals all over the world,” Stinson said. “They are a showcase for these independent films. It sort of democratizes the distribution process because it’s not restricted to the movies studios are willing to gamble money on.”

The course is now in its eleventh year, with creator and film studies professor Nico Maestu at the helm.

“By going to a film festival, suddenly you explore the whole world of film,” Maestu said.

The Santa Barbara International Film Festival began Wednesday and will host a multitude of tributes throughout the week, honoring actors, actresses, directors, and artists who have contributed greatly to film in the past year. This year’s honorees include Glenn Close, Melissa McCarthy, Viggo Mortensen and Michael B. Jordan. Hugh Jackman was honored with the Kirk Douglas award back in November.

In the fall, students can register for FS108B, which is similar to its spring counterpart but takes place at the AFI Film Fest in Hollywood.