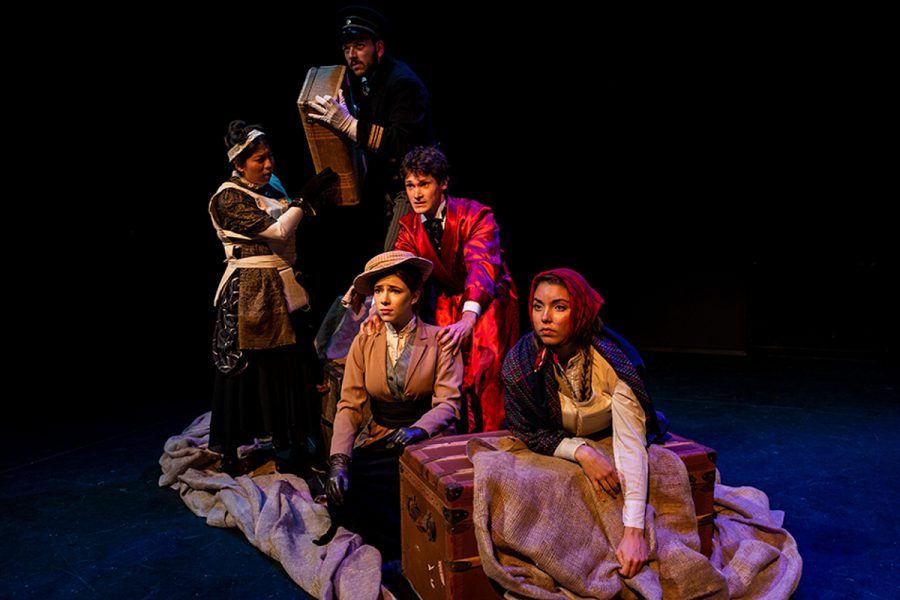 The Jurkowitz Theatre was transformed into a lifeboat, high society and a courtroom for the Theatre Arts Student Showcase.

City College has one student showcase each school year that features only student actors. This year, the play is Luke Yankee’s “The Last Lifeboat,” which tells the story of J. Bruce Ismay, the owner of the White Star Shipping Line. The play is running from November 7-17 in the Jurkowitz Theatre at SBCC.

The play involves Ismay’s decision to escape on a lifeboat after the Titanic hit the infamous iceberg, saving himself after assisting as many people as he could. With this, Ismay became a scapegoat, having large amounts of blame placed on him for the tragedy that occurred.

The play also explores Ismay’s personal life, including how his father impacted his decision to built the RMS Titanic, his history with being awkward with women and the harsh criticism he faced in the media.

The intimate atmosphere of the Jurkowitz Theatre added to the overall feel of the play. The tensions were elevated when, spoiler alert, the famous Titanic sank, as it was happening right around those sitting in the front rows. Not only that, but all of the costume changes occurred before the audience’s eyes, which is quite unusual.

That was, admittedly, quite distracting. Although the idea of several small and quick changes seemed neat in theory, it took away from the experience in practice. The rest of the play was very minimalistic, and it felt odd to be watching Ismay’s wife remove his ex-lovers top in the background.

The play was characterized by several short scene changes, each punctuated by music cues and different projections. This felt like a bit much at first, when there was a succession of very quick scenes, but the play quickly found its groove, allowing for the story to take the audience away.

While not a particularly uplifting play, it was extremely interesting, especially when you are somebody who enjoys history but ultimately knows very little about it. Ismay’s story was incredibly touching, and excellently portrayed by Johnny Waaler.

Waaler was able to convincingly act as an innocent child, a terribly awkward 19-year-old, a haunted middle-aged man and a frail older man who’s lived his life in its entirety.

Waaler was surrounded by Hannah Brudney and Mimi Vörösmarthy, both graceful and lovely as his two loves, and a talented ensemble. All members of the ensemble were able to seamlessly move between characters, and it was very clear who was who, which is sometimes not the case when actors play multiple roles.

Although “The Last Lifeboat” is a relatively new play and has not had the chance to establish itself yet, it is definitely worth a watch, especially since it allows you to see the hard work of the talented student actors at the college.

City College will also be hosting the playwright, Luke Yankee, after the performance on November 11. The discussion will be free with admission.