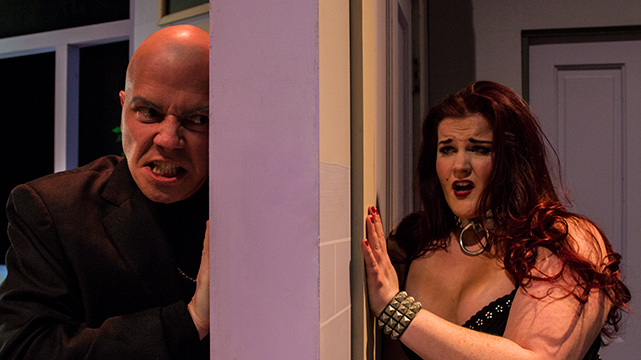 The time-travelling comedy thriller “Communicating Doors” made its debut Wednesday night with a storyline that left the Garvin Theatre audience on the edge of their seats and hooked until the end.

Written by Alan Ayckbourn and directed by Katie Laris, the play shows how three women attempt to prevent their own murders after learning about their own demises. The relationships between the characters are so dynamic that it’s hard to not be invested in them.

One of the most intriguing things about the show was the way the set and the actors were able to  emphasize the element of time travel. The story takes place in the same hotel room during 1980, 2000, and 2020, and the set featured a cleverly-made time-travelling cupboard that spun around when the characters stepped inside to signal the change in time.

Once Poopay realizes she is stuck in a messy murder plot, she tries to escape but is instead transported back to the year 2000 where she meets Ruella, one of Reece’s wives, played by Leslie Gangl Howe. Poopay and Ruella become quick buddies and fast thinkers as they have the chance to change their own fates.

We meet Reece and Harold, the house detective, when they are in their 60s or 70s and at other times when they’re in their 30s. The two did a phenomenal job at performing and differentiating the qualities of their various ages.

Poopay and Ruella also made an amazing duo as they both had to make challenging decisions for themselves. That gave them this strong and empowering aura that was amazing to see on the stage. The female presence was strengthened by Reece’s first wife Jessica, played by Brittany Harter, who was ditzy but still able to escape her demise.

The comedy really picks up in Act 2 as we go along with the three women racing to save themselves. I found myself gasping and laughing at the same time. The scene where Ruella is dangling from the balcony by just a bedspread triggered about two straight minutes of laughter. But you’ll have to see what happens for yourself.

Without giving anything away, I can say the ending is not to be missed. It turns out time travel will change everything, and the twist at the end is sure to leave the audience in a feel-good, sentimental mood.

There is still time to experience this comedy thriller and travel through time as this play will continue to run through March 17.