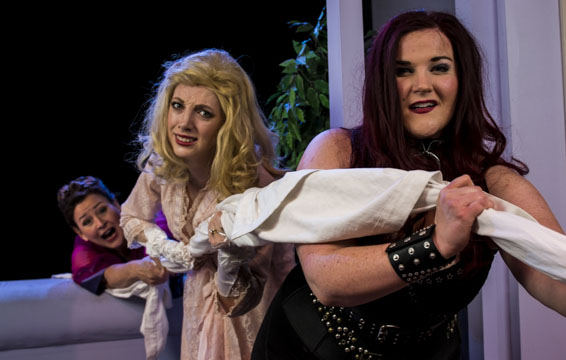 The time travelling thriller, “Communicating Doors,” is bringing British humor to the stage of the Garvin Theatre at City College starting Wednesday, Feb. 28.

Taking place in a five-star London Hotel, the play is about a sex specialist who finds herself thrown into a murder mystery. The mystery leads her to a set of time-travelling hotel doors, giving her a chance to change the fate of two women who were murdered.

“It is truly a play where the plot plays out moment to moment.” said Katie Laris, the play’s director. “You don’t know and the characters don’t know what is going to happen next. I hope that audiences will suspend their disbelief about time travel and go along for the ride,” she said.

The play features a small cast of six, who will perform British playwright Alan Ayckbourn’s intricate, comic thriller that is sure to fill the 370-seat Garvin Theatre with laughter and suspense.

“It’s a brilliant British farce, kind of on the form of those bedroom farces, with the slamming doors and its fiery fast dialogue,” said actress Leslie Gangl Howe who plays one of the characters named Ruella.

Other characters include Reece, the guide for the other characters, Julian, the creepy antagonist, Harold, the very comedic house detective, and Jessica, who Stage Manager and City College student Patrick Lownes-Santos called “an upper class girl, but in a daddy’s money sort of way.”

Hall explained how making sure each character had the correct dialect was important to making them seem real. “We all have British accents but we’re of different classes,” she said.

One difficult thing was “trying to get that dry, British comic sense,” Howe said. Watching Youtube videos, British TV shows, and having a dialect coach were just some of the ways Hall and Howe prepared for their roles.

The preparation for the production has been going on since before the Thomas Fire started, and the actors and crew have done a lot to make this show into perfection despite the difficult times.

“I am excited for the humor to show through to the community, especially at this point where there’s been a lot of tragedy with the fire and the mudslides,” Santos said. “It will be really good for people to just sit there and laugh to end these times on a good note.”

More than comedy, Howe said that what she took away from the show was the relationship between Ruella and Poopay. She said it’s good that the department is putting on shows with empowering and strong women who figure everything out for themselves.

“Communicating Doors” will be previewed at 7:30 p.m. on Wednesday, Feb. 28 and Friday, March 1 at the Garvin Theatre on campus. The show will play until March 17, with performances at 7:30 p.m. from Thursday to Saturday, and at 2 p.m. on Sunday.

For more information call the Garvin Theatre box office at (805) 965-5935 or purchase tickets here. Prices vary by show, with discounts for students and seniors.