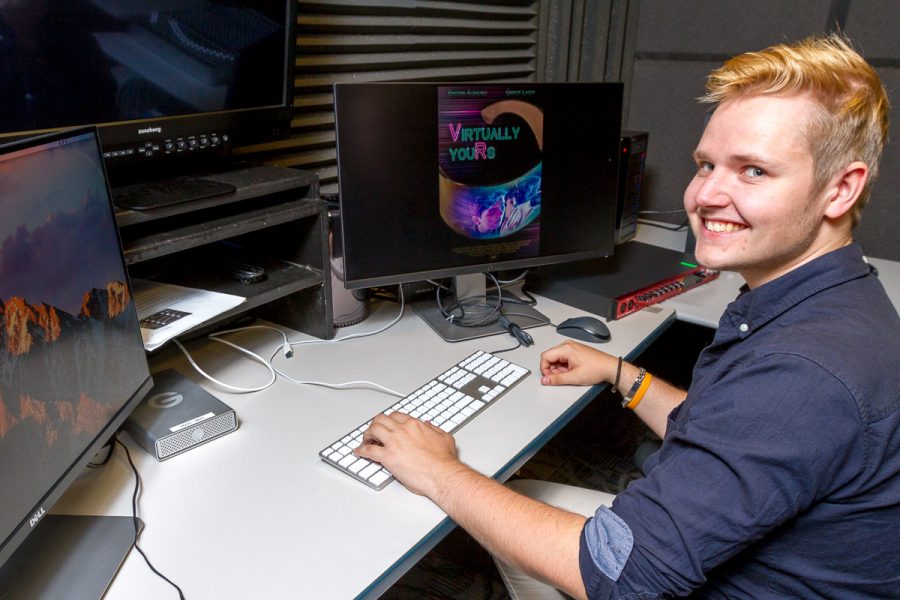 Victor Sjölin works in a capstone editing studio inside the Humanities Building Room 231 at Santa Barbara City College on Jan. 31. Sjölin works on the promotional poster for the film ‘Virtually Yours’. The film will be debuting at the Arlington Theater in Santa Barbara on Monday, Feb. 5.

City College film students will have their capstone film screened for the Santa Barbara International Film Festival on Monday, Feb. 5, at the Arlington Theatre.

The 24-minute short film, titled “Virtually Yours,” was directed by Andrea Lithner and produced by Victor Sjölin for City College’s capstone film production class, a class taught by Film and Television Chair Curtis Bieber in which finishing film students produce one professional short. The film tells the story of a young woman who immerses herself in a virtual reality game to explore a relationship she couldn’t have in real life.

The film was submitted in the festival’s competition, in which only 7 percent of the submitted films are accepted, according to a City College press release. It’s the third City College capstone film in a row to be screened at the film festival.

“None of us came into this film expecting to get paid,” Sjölin said, explaining that entry into the film festival was the ultimate goal for the crew.

After City College offered a grant of $5,000 to help fund the film if it raised enough of its own money, Sjölin and Lithner were able to collect nearly $8,000 for the project, $800 of which came from friends and relatives on social media. Every member of the film crew also contributed $100.

“If you really want to do it, you’re going to get a long way in this business,” Lithner said.

Although Lithner and Sjölin are both from Sweden, the two hadn’t met until they enrolled in Cinematography 1. Their collaboration on the film came out of a pact they made shortly after they met, promising each other that they would create a film together.

Using a script written by fellow film student Gustav Högmo and chosen by their capstone class, the two young filmmakers set out to tell the story of an atypical futuristic relationship.

The film was largely inspired by the visual elements of “Blade Runner” and by the story of the upcoming Spielberg film “Ready Player One.” Lithner said that coloring and lighting were the most essential tools used in creating the film’s distinction between real life and the virtual world, and that its predominantly female cast came out of her urge to “accentuate the femininity of film.”

Committed to getting it to the festival, Sjölin and Lithner worked 10 to 15 hours days since the end of August to realize their goal.

The duo have a cohesiveness that they attribute to their decision to move in together in order to focus on the film. Lithner compared their relationship to a restaurant.

“The producer owns the restaurant, while the director decides what happens with the food,” she said.

One of the goals of “Virtually Yours” is to inspire people to take risks in real life, Sjölin said. The film is targeted at a young college audience who could relate to the immersive experience of technology.

The film will be screened with the festival’s other narrative shorts at 8 p.m. on Monday, Feb. 5, at the Arlington Theatre. Individual tickets will be sold at the door for $10.